How is it almost the end of October already?! It feels like the holidays are right around the corner, and I'm so not ready! This month has been incredibly busy, so I didn't have time to shop much. I'm in the middle of preparing a paper for an important conference, and the deadline is coming up in 2 weeks. Wish me luck! Anyway, here's my haul for the month. 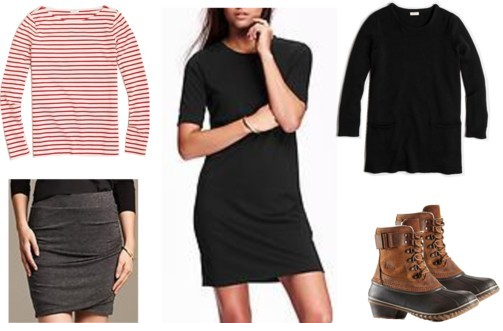 J.Crew Factory long-sleeve striped boatneck tee (red white stripe XXS) - I already own this tee in navy stripe and wear it a decent amount, so I was sure I could get plenty of wear out of this red/oatmeal version. It runs a little small, so I had to try on several before I found one that fits well. Originally $49.50. Paid $29.50 + 30% off + 3% off ebates = $20.03.

Banana Republic ruched gray jersey skirt (medium gray heather XS) - I saw this skirt on Valley of the Shoes and immediately ordered it, even though it's not my usual style. It's super comfortable and so easy to wear! I especially like the way it looks with a tee, denim jacket, and sneakers. Sadly they didn't have this in my usual XSP, so I had to get an XS. The fit is a little larger than I'd prefer, but it's workable. I've already worn this a few times. Originally $59.50. Paid $14.99 + 40% off + 2% off ebates = $8.81.

Old Navy half-sleeve ponte-knit dress (black XS) - I've been looking to add a casual shift dress to my closet since June, and I finally found one that I like! I never expected it to be from Old Navy though. In general, I tend to be sized out there. However, the reviews for this dress said that it ran small, so it actually fits me really well! Great wardrobe basic and very affordable too. Originally $34.94. Paid $10 + 2% off ebates = $9.80.

Sorel winter fancy lace II boot (elk/grizzly bear 6.5) - So I've been wanting to get a pair of duck boots for months now. At first I considered getting the L.L.Bean ones, but apparently they tend to run a size large and so I would be sized out. Then I tried on these Sperry ones, but they felt flimsy and insubstantial. Finally, I saw these boots on Jean and ordered them right away from Amazon for 20% off. They run half a size small, so I had to order a 6.5 instead of my usual 6. They're pretty warm and not too clunky for winter boots. The color is really nice and goes with everything. Originally $149.95. Paid $149.95 + 20% off + $5 off = $114.96. Edit 11/20/2015: I ended up returning these, because they were closer to winter boots than true duck boots.

As I mentioned in this post, I also ordered this fair isle sweater, this herringbone blazer, and these olive suede ankle boots from J.Crew Factory earlier this month. In the end, I decided to return all three. The fair isle sweater was very pill-prone, which is something that I didn't notice the first I tried it on, but I know is an issue that would bother me in the long term. The herringbone blazer is great quality, but it runs just a little small, and I found the sleeves a hair too long. Since it wasn't perfect, it's going back too. I'm so disappointed by the olive booties! The color is gorgeous, but the ankle opening was much too large. I could almost slip them off without unzipping. Oh well, I guess that just means I have more money to work with next month.

As always, I'm linking up with Franish and the Budgeting Bloggers. How did you do on your budget this month?