A few weeks ago I attempted a KonMari-style clean-out of my closet (despite not having actually read the book). It's something I've been interested in doing for a while, but I could never seem to find the time. One weekend I finally decided to sit down and purge everything. My main reason for the clean-out was to reduce the amount of clutter in my closet, so I can actually see the things I want to wear, instead of only the things that I never wear.

The first thing I did was pull everything out of my closet and pile it all onto my bed. Here's a picture of the resulting chaos. Coats and shoes weren't included, because those were part of my hall closet purge. Also, I apologize for the poor image quality, but the lighting in my apartment is really bad! 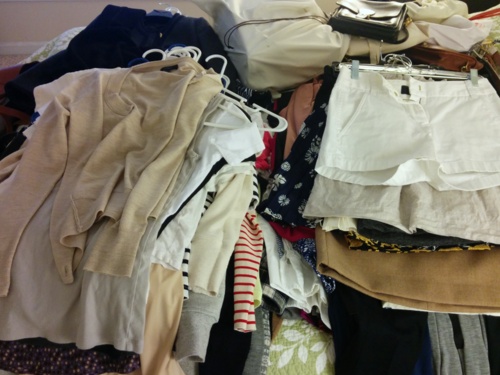 After emptying the closet, I picked up each item, thought about how I felt in it, and then decided to either put it back into the closet, add it to the donate pile, or try to sell it. About a quarter went to the sell pile, a quarter to the donate pile, and everything else went back into the closet. It was difficult to let some pieces go, especially when they were new with tags (ack) or in like new condition. I kept feeling bad about how much money I had wasted, but ultimately I decided that it was better to let those pieces go rather than hold onto things that I never wore and even worse, made me feel guilty. I did keep a few iffy items though. They're currently on probation, so if I don't wear them enough in the next few months, I'll get rid of them.

Here's a picture of my newly clean closet (minus whatever was in the laundry at the time)! There's also a cat. ;) 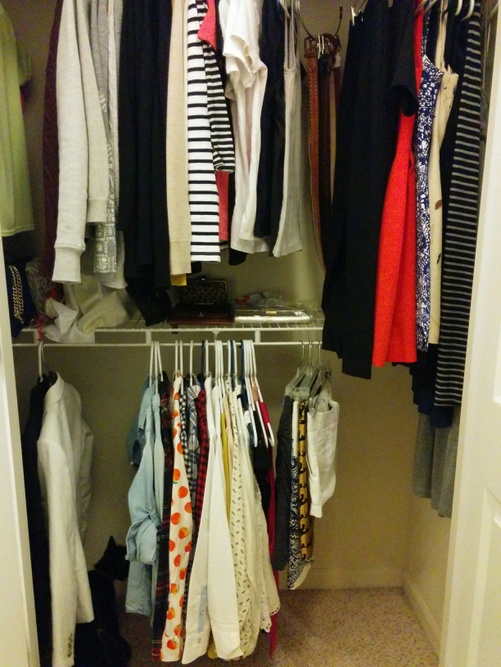 My experiment was such a success that I went on to purge the hall closet and my fiancé's closet! I think it really helped to take out everything and then decide what to put back. In the past when I've cleaned out my closet, I left everything inside initially and only removed items. In the first scenario, you choose what to keep, whereas in the second one, you choose what to discard. By  keeping only the best pieces, I was able to get rid of even more of the mediocre stuff.

So what was I left with at the end of the day? Loving numbers, I decided to tally it all up.

That's still a pretty large number, but I know it's significantly less than what I had before. To prevent another huge closet purge in the future, I'll try to be even more thoughtful about what I add to my wardrobe. I would also try the take-everything-out approach again in the future!

Have you tried the take-everything-out approach for cleaning your closet?