I've been super busy lately (both in terms of school and personal life), so both blogging and shopping have fallen by the wayside. I wish I could say things are less hectic now, but unfortunately that's not the case. One good thing about being extremely busy: my budget looks great! Here's a recap of all the stuff I bought over the last two months.

August was a boring month for shopping. I literally had zero time, so I only bought necessities. 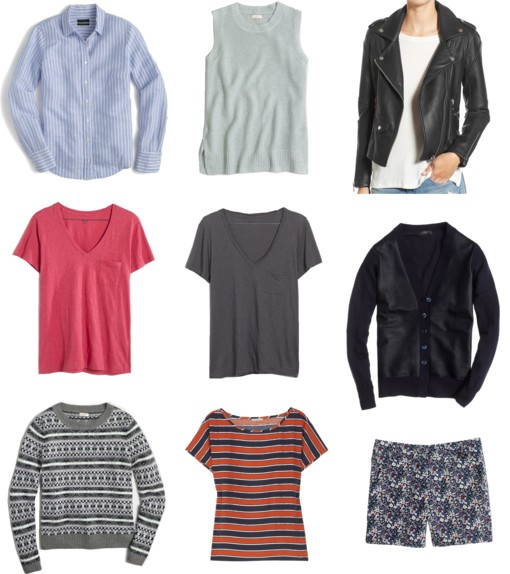 BLANKNYC easy rider faux leather moto jacket (black XS) via Nordstrom - This black moto jacket was a surprise love from the Nordstrom anniversary sale last month. The pleather is surprisingly nice quality and feels quite heavy/substantial. The jacket fits me well in the body and shoulders, but the sleeves are a little too long. For the price, I think it's a great deal. Originally $98. Paid $64.90 + 6% off ebates + $10 Nordstrom rewards = $51.01.

Last month I placed an order with Thredup for the first time. In the past I have sold my gently used items to them, but this was my first time as a buyer. I had a code for 50% off J.Crew pieces, so I figured I didn't have anything to lose. Overall I was very impressed by the condition of the pieces, and the prices were quite reasonable after using the discount code.

J.Crew Collection leather-front merino sweater (navy XXS) via Thredup - I like the way the leather panels look on this cardigan, but unfortunately it always has to be worn open. As it turns out, leather just doesn't conform well to the body. Originally $228. Paid $9.50.

J.Crew Factory fair isle sweater (pewter navy mist XXS) via Thredup - This fair isle sweater looks brand new. I missed out on it the first time around, so I was happy to pick it up at this price. Originally $88. Paid $3.

J.Crew Liberty 5" chino shorts in june's meadow floral (june's meadow 0) via Thredup - This is my favorite purchase from the Thredup order. I am obsessed with the Liberty june's meadow print and have been on the hunt for all the pieces I missed out on from the first time around. I found the blazer back in April, and now that I have the matching shorts, I wouldn't mind picking up the button-down too... Originally $72.50. Paid $19.50.

(not pictured) J.Crew elephant parade t-shirt (navy XXS) - This tee was a bit of a disappointment. I bought the original when it was first released, but wore it so much it developed holes (sigh, J.Crew quality control). I hoped this new one would be a replacement, but it also has a tiny hole. Originally $42.50. Paid $7.75.

How did you do on your budget this month? As always, I'm linking up with Franish and the other budgeting bloggers!
at August 29, 2016