The Cost of Living an Active Lifestyle

As I mentioned in this post, I used to be a serious couch potato until two years ago. In June 2016, I discovered a few activities that transformed my life, and now I am a much happier person for it. Recently I started wondering what the cost of that happiness is in terms of dollars. To satisfy my curiosity, I decided to go back through all of my online order histories and itemize the transactions. Luckily I only shop at a few stores, so the process wasn’t too tedious. I probably missed some little things here and there, but I think the numbers are in the right ballpark and provide a good lower bound on how much I’ve spent over the past two years on my active lifestyle.

I divided my costs by hobby into six categories: climbing, cycling, hiking, skiing, sailing (J is a sailor and he's been trying to get me into it), and miscellaneous. Climbing includes my monthly gym membership, climbing shoes, belay devices, harness, and other assorted equipment. Cycling includes the cost of my bike, bike parts/accessories, and cycling clothes. Hiking covers my backpacking backpack, daypack, and hiking boots. Skiing (a notoriously expensive hobby) includes my ski jacket, pants, boots, helmet, goggles, and base layers. So far sailing only consists of UPF clothing. Miscellaneous is the catch-all for everything else that doesn’t fall specifically into one of the other categories. For example, this includes activewear such as my Patagonia packable down coat, my beloved Patagonia fleece, and my Mammut rain jacket (50% off right now), which I wear for a wide variety of activities.

The total amount of money I have spent on my active hobbies between June 2016 to present is $5,198.16, which comes out to approximately $216.59 per month. Whew, that’s a pretty penny! For reference, a Chanel boy bag costs about $5,200. When I dive into the data, I see that my single most expensive purchase was my carbon fiber road bike at $1,053.92. It would have cost about $3,000 brand new, but I got an older model second-hand from an authorized dealer to “save” some money. Luckily, it’s just a one-time upfront cost, and now the more I ride it, the less it costs per mile. It also brings me a lot of joy, more than I would get from a handbag (even a Chanel one). 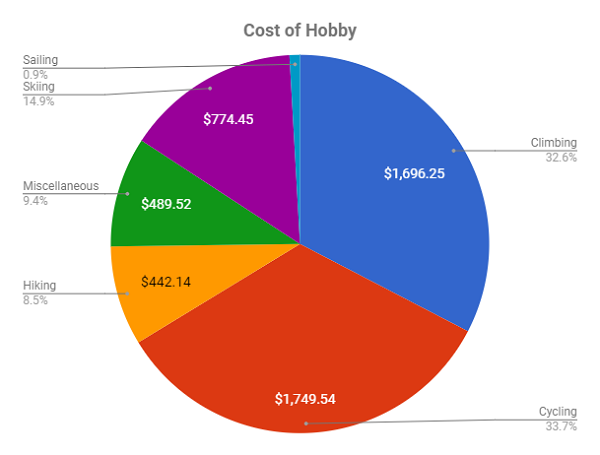 When I separate out the costs by hobby, it’s no surprise that cycling comes in at number one since the bike was so expensive. However, I was surprised that climbing was my second most expensive hobby, because the upfront costs aren’t particularly high (although it does start adding up when you climb outdoors since it requires additional safety gear that the gym usually provides). It makes sense though when I look at the break-down of upfront versus recurring costs. Over time, my gym membership dominates the overall cost and is actually more than the cost of the equipment and hardware that I own, and that percentage will only increase with time. 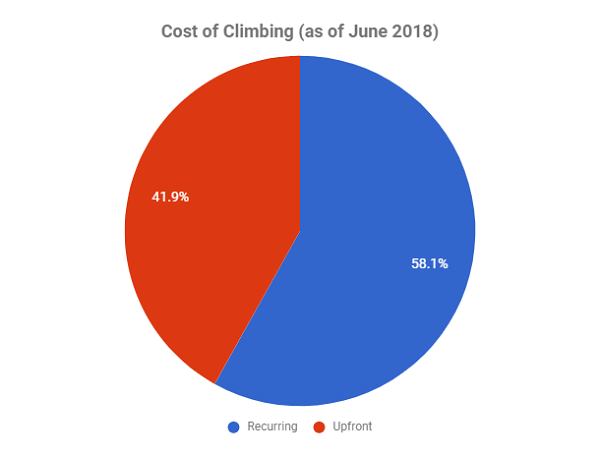 I also wanted to look at which stores were getting my money. The main retailers were REI, Backcountry, Evo, and Amazon. The ‘other’ category encompassed one-off purchases from specialty stores, including the dealer I bought my bike from. Apparently I spend most of my dollars at REI. No surprise since they have an amazing return policy, where you can return anything (even if you’ve used it) for up to a year with no questions asked. Backcountry gets the next biggest slice, because they frequently have the best prices on gear. Next is Evo, which is a great place to buy discount ski gear. Finally, Amazon is my go-to place for everything else. 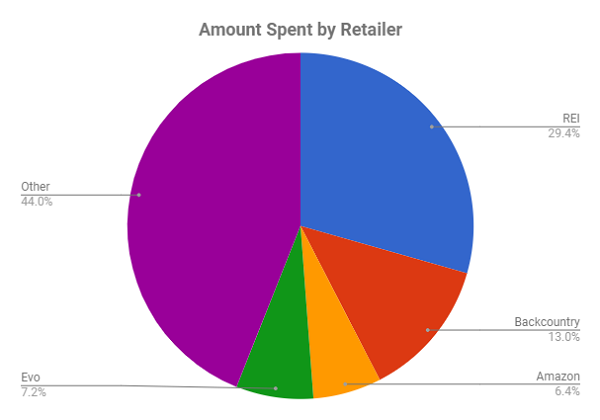 I also did an analysis of how much I spent each month. As you can see, my most expensive month was June 2016 when I bought my bike. There was another spike in November of that year when I bought my first wave of climbing gear. I waited until I had been climbing long enough to be sure that I liked the sport. Then in Spring 2017, I started hiking more and going on outdoor climbing trips, so I bought two backpacks and a pair of hiking boots for that. In the winter, I went skiing for the first time with J (who is a fantastic skier). I needed ski clothes for the two trips we took last season, which included a week-long family ski vacation in Canada. Then in early 2018, I bought some cold-weather stuff that was super discounted, which I'm putting away for next ski season. In May 2018, I bought some more outdoor climbing gear as a birthday present for myself. 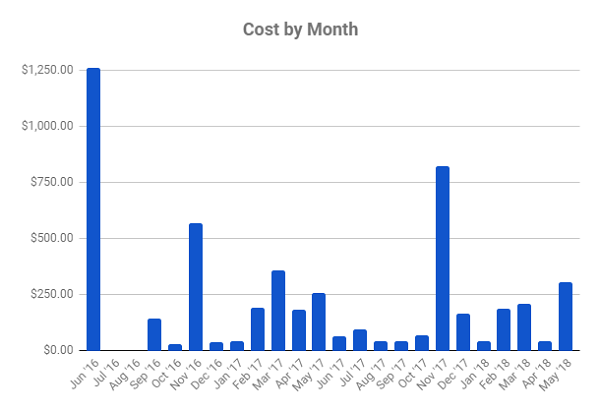 Hopefully I am mostly set now in terms of major equipment (unless I decide to buy my own skis later this year), and I won’t be spending too much more on new stuff going forward. I know this may seem like an enormous amount of money to spend on hobbies, but I consider it an investment in my mental and physical health. As I mentioned in this post about my financial situation, I don’t carry any debt, I have zero dependents, and I have savings. Also my expenses at the moment are relatively low (which I may talk about in a future post). I feel like at this point in my life, I can afford to spend some money on activities that are good for me which also bring me joy.

What’s your most expensive hobby? How much do you think you spend on it per year?