Here's Part 2 of my J.Crew reviews from last weekend. Part 1 focused on tops. This time I'll be talking about dresses and shorts. 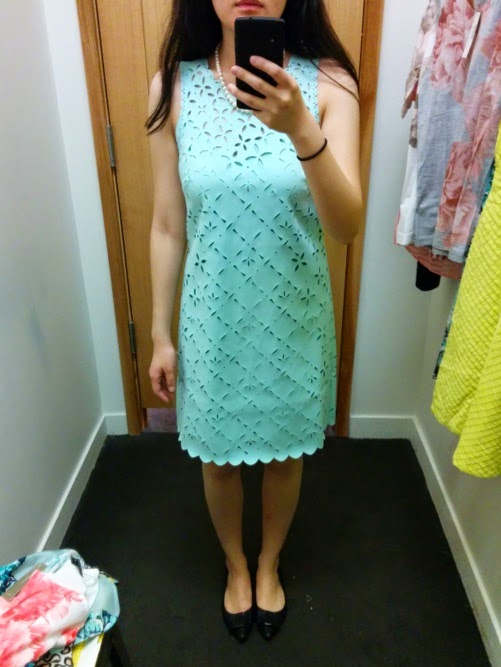 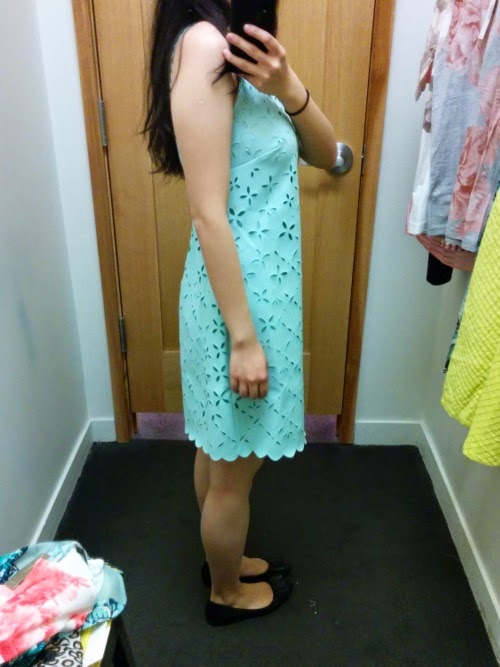 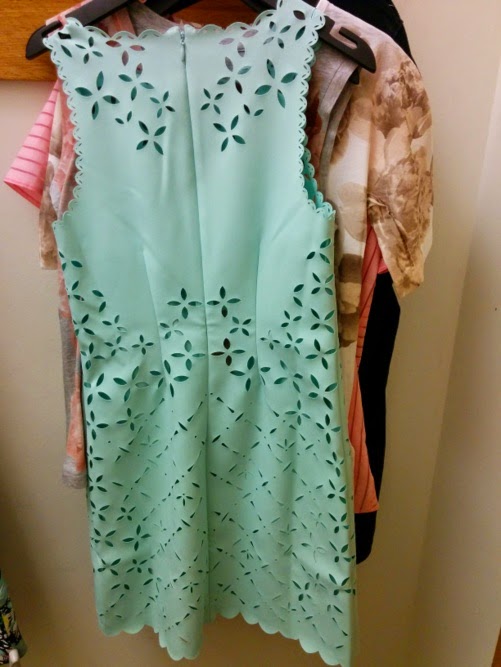 This dress reminds me of the scallop dress from two years ago but with perforations. The material is a similar plasticky/stiff fabric. There's a slip underneath in the same color that looks like it might be detachable. The overall length was longer than I'd like, coming down to almost the top of my knee. I would prefer if it was closer to a mini dress as shown on the model. To achieve that look, I would probably need a 0P. Also, the laser-cut pattern on the front is different from the pattern on the back. Personally I think the pattern on the back was prettier. As for the fit, I understand that the dress is supposed to have a shift silhouette, but I still wish it was more form-fitting, especially around the waist. On the bright side, I really liked the robin's egg blue of this dress. It also comes in three other colors.


Verdict: Meh. True to size but bulky in the waist. 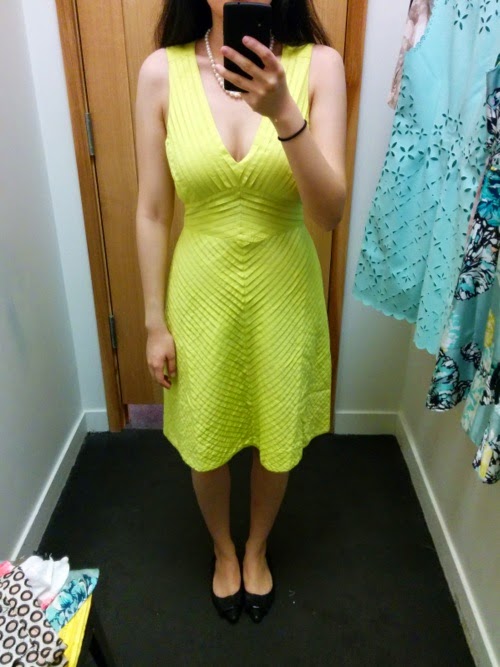 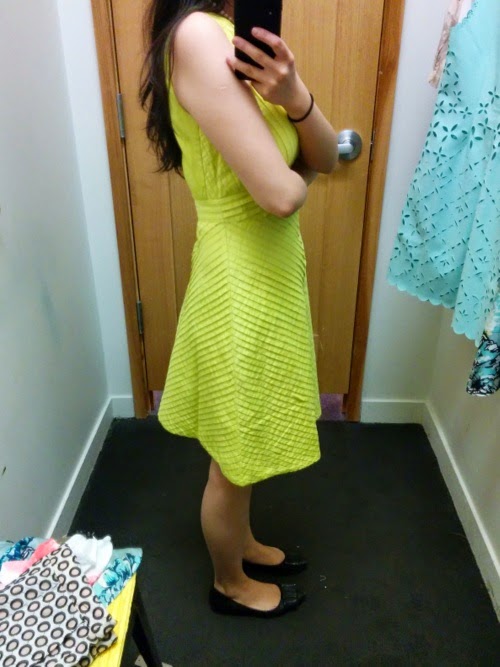 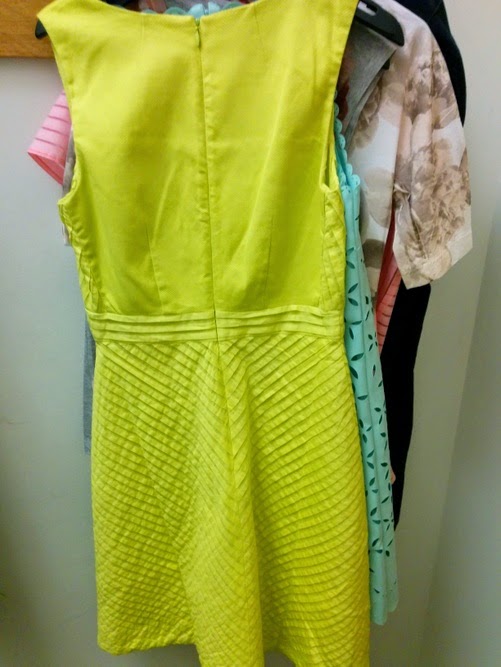 I've always wanted a yellow dress. Not neon yellow but something closer to goldenrod. This dress looks a bit neon in my photos, but in real life, it was more of a warmer yellow and not so fluorescent. There's a back zip, but it didn't zip down far enough for me to easily step into the dress. I had to wiggle it past my butt. Once on, I found the waist too tight. Perhaps I could size up, but the v-neck was already very deep and showed too much cleavage for my comfort. I did like that the dress was made of 100% cotton, and the chevron pattern was visually interesting. It was pretty slimming viewed from the side. All the seams lined up, which was nice. There was an issue with the back zipper not lying flat, but that could have been a one-off thing.


Verdict: Meh. A little small and the V is too deep. 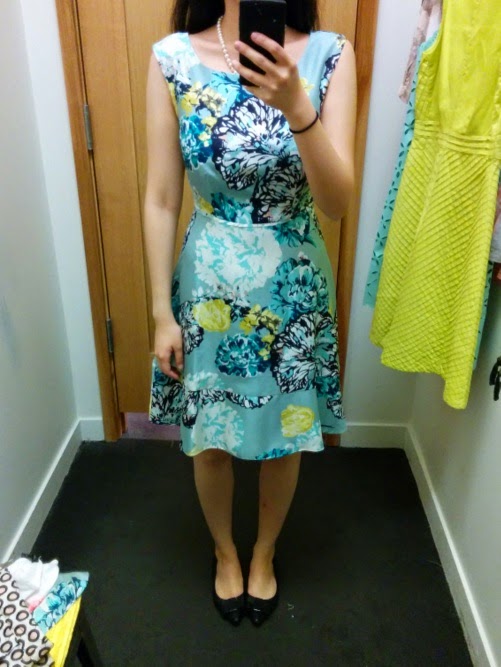 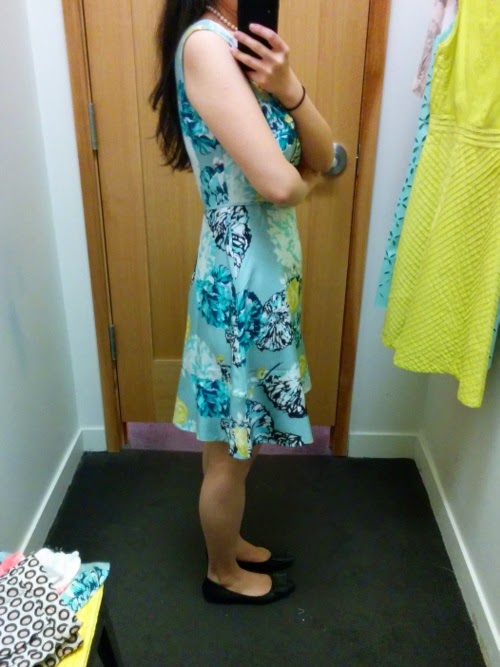 I was pleasantly surprised by the price point of this dress. It's 100% silk with a polyester lining for $158. It would have been nice if the lining was also silk, but for the price, I can't complain too much. The silk was medium weight with a nice drape. As I mentioned in my last post, I love the aquatic floral print. This was no exception. I liked how swingy the skirt was. The zip was easy to get in and out of. The shoulders were a little weird. Rather than being completely sleeveless, the straps sort of sat on the shoulders. Also I wish the pattern had been better lined up, especially on the flounce. Or just get rid of the flounce entirely. Nitpicking aside, I think this would be a beautiful dress to wear to an upcoming garden wedding. We'll see if it goes on sale in time. 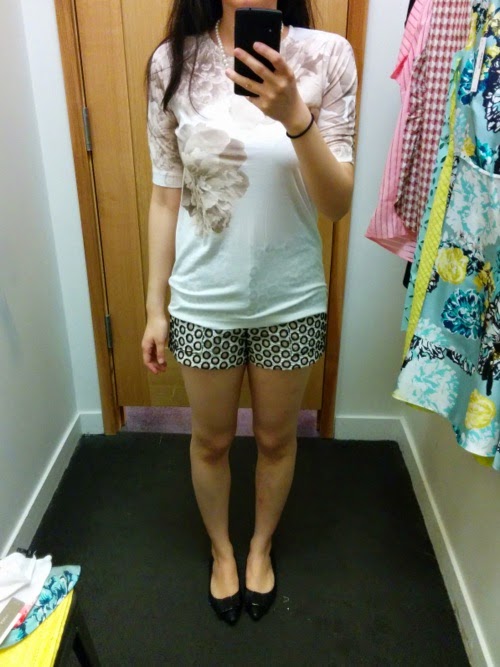 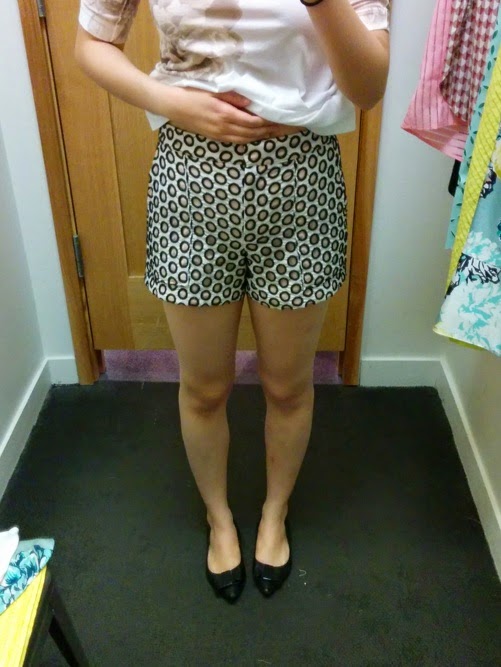 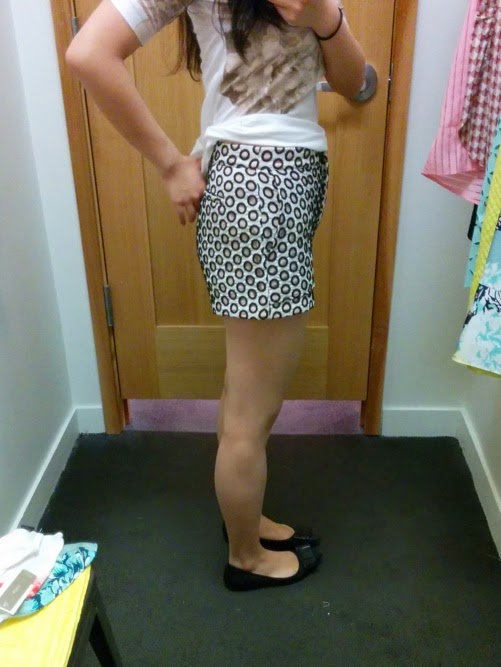 I was interested in the punched-out eyelet skirt, but that's already sold out in most sizes. I had to settle for trying on these shorts instead. My first impression was that they felt very thick. Essentially there's a cotton punched-out layer followed by a poly under layer, so they really are twice as thick. They didn't have my usual size 0, so I just grabbed it in a 00. It fit exactly with no room to spare, so in the future I should get the 0. These shorts were high-rise, coming up almost to my belly button. There's a little bit of piping that looks almost like pleats. There were also slant pockets, which I liked. Overall, it's a fresh take on polka dots. 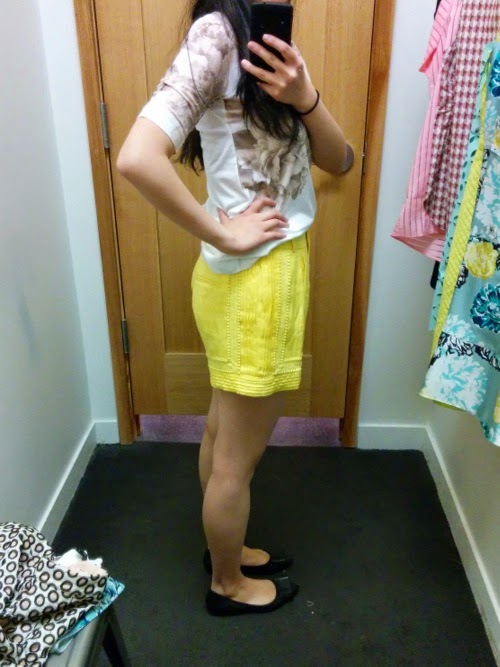 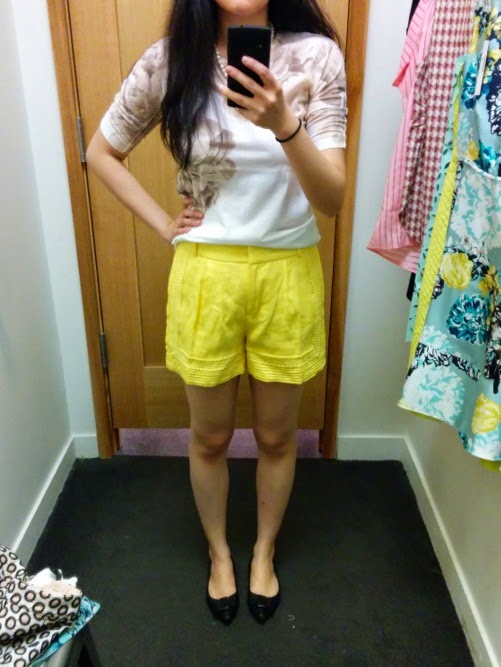 I don't know what to think about these shorts. The shape and pleats look formal, but the fabric and embroidery say casual. They also felt very thick when I picked them up, which makes sense since they're double layered. The nice thing about the cotton under layer is that it gives the top linen layer some structure. Also, this way the linen doesn't cling to your body. The leg holes were very large and roomy. The waist was also large. I would recommending sizing down. The tonal nature of the embroidery makes it very difficult to see the details. I think it would have been more interesting to use a contrasting color. Anyway, this doesn't make my wishlist.