March has been the month of the pant. Shortly after we adopted Catniss in February, two pairs of my jeans bit the dust. First my favorite medium blue pair got destroyed by her overly long kitty claws, and then I found a hole in the seat of my beloved dark grey American Eagle jeggings. So I started searching high and low for their replacements. I bought a few pairs at the beginning of the month that I liked so I could have just stopped there... but I didn't. Since I was on a roll, I kept trying on more and more pants. Over the course of this month, I've tried on at least 12 pairs. Out of those I decided to keep 4, which sounds like a lot. In my defense, it's really hard for me to find pants that fit well so I think it's fair to keep any that do since I have to try on so many pairs to get one keeper. Pants aside, I also picked up a pair of earrings and a floral tee this month. Here's what worked out for me.

Madewell skinny skinny sateen jeans (true black 26 and dark olive 26) - I reviewed these jeans back in October of 2014, and it took almost 6 months for these babies to finally go on sale. I was so excited that I ended up ordering all three colors. I originally wanted the plum, but I have another pair now in a similar color, so I decided to return those and keep only the black and olive ones. So far I've only worn the black pants, but I really like them. They're super comfortable, because they're so soft and lightweight. They did stretch out a little in the legs throughout the day but not enough to bother me. Perfect pants for warmer weather. Originally $128 per pair. Paid $79.99 + 30% off + 2% off ebates = $54.87 each.

J.Crew toothpick cone denim in parker wash (parker wash 25) - This is my favorite toothpick jean to date. I love the medium-dark wash, which is a versatile shade of blue/grey. The whiskering may be a bit aggressive for some, but I like how they add depth and dimension. I also really like the length, which is a little longer than other toothpicks I own. The best thing of all? They don't stretch out with wear! I've already worn these jeans four times this month, and they haven't really stretched out at all. These are well worth the money, and I highly recommend them. I'm considering buying a second pair. Originally $125. Paid $98 + 30% off + 30% off (price adjustment error in my favor) + 10% off + 1.5% off ebates =  $42.57. 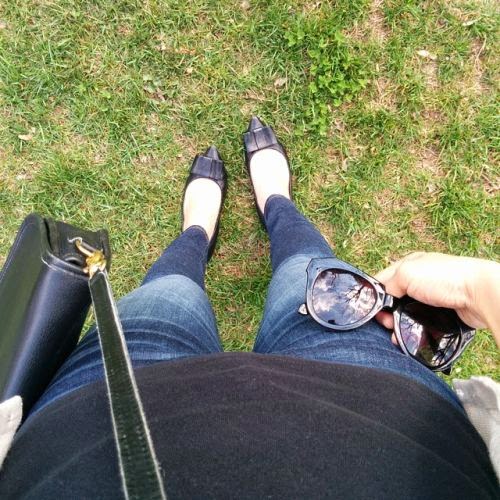 Gap 1969 Resolution slim straight jeans (black stonewash 26P) - Has anyone else tried the new Gap Resolution jeans? I think they're a big improvement over Gap's older styles. The material has gotten a little thicker and the rise a little higher. I find the new fit much more flattering. I decided to buy this pair, because the wash is the closest I've found to the American Eagle jeggings I wore all the time. Also, since I own so many pairs of skinny jeans, this skinny-straight silhouette is a breath of fresh air. Originally $69.95. Paid $69.95 + 40% off + 2% off ebates = $41.13.

Kendra Scott Elle earrings (turquoise/gold) - Last month I bought the Kendra Scott Elles in dark grey for 40% off. They're a great neutral, but I also wanted a statement pair. A few days ago, I saw that Nordstrom was price-matching Bloomingdale's Friends and Family sale, and the turquoise pair that I've long coveted is included! I finally snagged them. Originally $52. Paid $39.00 + 6% off Ebates = $36.66.

J.Crew Factory photographic floral collector tee (heather charcoal XXS) - Last weekend everything in store at J.Crew Factory was 50% off plus the extra 30% off coupon from Gilt City was in effect (not stackable with the student discount), so I thought I would stop by and check out the new arrivals. After wandering the whole store and trying on various things, the only thing I really wanted was this tee. It's still a little expensive after discounts, but I do really like it. It's a good way for me to ease into wearing more patterns. Originally $42.50. Paid $42.50 + 50% off in-store + 30% off Gilt City coupon = $14.88.

Earlier this month I tried on several pairs of white jeans (see my reviews here). I was sorely tempted to keep one of the pairs but ultimately decided not to, thanks to the wisdom of several readers who counseled me to continue my search. Thanks for your awesome advice!

Next month I would like to focus on button-downs and adding more colors/patterns to my wardrobe. I've been buying a lot of neutral classics lately, which is great for building a cohesive wardrobe but takes the fun out of getting dressed in the morning. It's time to bring back the excitement!

As always, I'm linking up with Franish and the Budgeting Bloggers! How did you do on your budget this month?