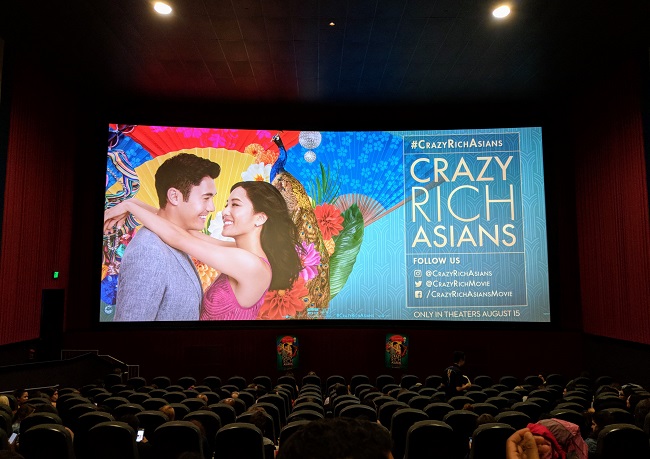 I love Kevin Kwan's bestselling novel Crazy Rich Asians, so I was super excited when I heard it was getting made into a movie. I was even more excited when I was lucky enough to score a ticket to an advance screening in my city. You guys, it does not disappoint! If anything, I would say that the movie is even better than the book, which very rarely happens.

If you're not familiar with the story, here is a brief plot summary (no spoilers). Rachel Chu, a Chinese-American economics professor from NYU, finds out that her Chinese-Singaporean boyfriend Nick Young is not just a humble history professor. He is actually the Nicholas Young, heir to a massive fortune and the most eligible bachelor in all of Asia. They take a trip together to Singapore to visit his family and to attend the hottest event of the year: the wedding of Nick's best friend Colin Khoo and fashion icon Araminta Lee, both from extremely wealthy families. Right away, Rachel is made to feel like an outcast by the Singaporean elite, because she was raised by a single mother and is more American than Chinese. Also, unlike everyone else from Nick's world, she wasn't born with a silver spoon in her mouth. In particular, Nick's mother Eleanor Young disapproves of Rachel and warns her to stay away from her son. Hijinks ensue as Rachel tries to navigate her way through Nick's world.

Like the book, the movie is super fun. There are lavish parties, exquisite couture costumes, dazzling jewelry, and amazing scenery. The characters are so wacky and over-the-top, like Rachel's best friend Peik Lin (tasteless new money), Nick's cousin Eddie Cheng (obsessed with having the perfect image), and trashy gold-digging soap opera star Kitty Pong. The casting choice really brought the characters to life in my opinion. I like Constance Wu (Fresh off the Boat) as Rachel. She was fresh, plucky, and sassy. I also love Michelle Yeoh (Crouching Tiger Hidden Dragon, Tomorrow Never Dies) as Eleanor Young. She was so proud and elegant, a true tiger mom. I feel like she really nailed the nuances of the character. But my favorite ended up being Awkwafina (Ocean's Eight) as Peik Lin. I didn't particularly like the character in the book, but Awkwafina stole every scene she was in. She had perfect comedic timing, and it was hilarious to watch her deliver her killer one-liners.

I really enjoyed the movie, and I highly recommend that everyone go see it. I'm already planning to go again with my boyfriend when it comes out in theaters. The movie was very funny and even touching at times. Even though the story is set in Asia and revolves around Asians, its themes are universal: dealing with your significant other's family, feeling like you don't belong, complicated family dynamics, etc. Also, this is the first time in a long time that Hollywood has made a movie with an all-Asian cast. In general, directors are reluctant to cast minority actors in lead roles, because they believe that people of color don't have mass appeal at the box office. We as moviegoers need to show up and send the message that we want to see more diverse casting in American media. But hey, even if you're not political, it's just a great movie!

If you want to learn more about Crazy Rich Asians, check out this article from the Hollywood Reporter. And go watch it when it comes out on August 15!

Have you read Crazy Rich Asians? Are you planning to go see the movie?