I stopped by my local J.Crew Factory on Friday to return a few things and decided to try on some stuff since I was already in the neighborhood. Even though it's winter, I'm still looking for more tees since they layer well under cardigans and blazers. Here are my thoughts on a few I tried on. 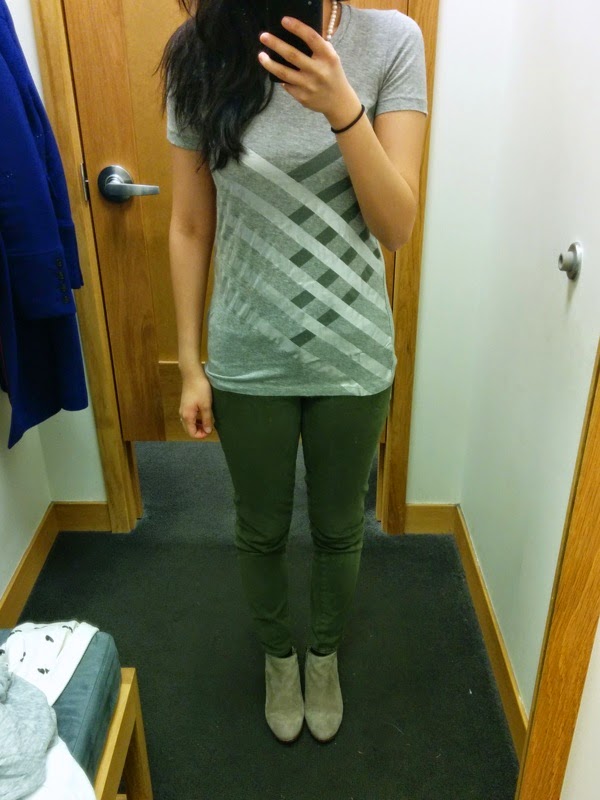 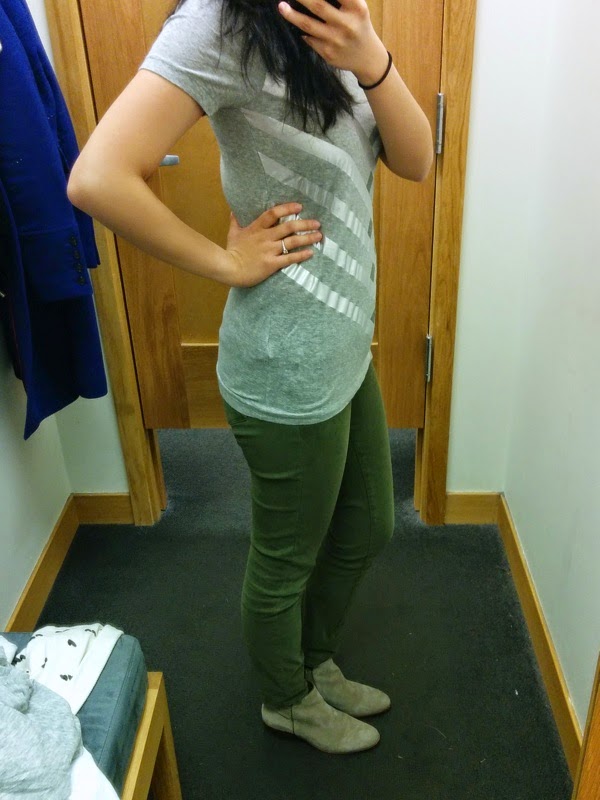 In general, I like Factory collector tees, and I like grey tees. This silvery grey version should have been an automatic winner, but instead it was a letdown. The fit through the torso and sleeves was decent; I found it to be true to size throughout. The length was good, and the medium heather grey shade is rather versatile. Even the graphic was fine, although it does bother me a little that the dark grey and silvery stripes didn't form a symmetric pattern. The problem was the silvery applique. It felt almost like duct tape rolled across the shirt. You can see in the pictures that the silvery stripes didn't lie flat. They had sort of a ripple to them. Overall this was just okay, not a home run for me. 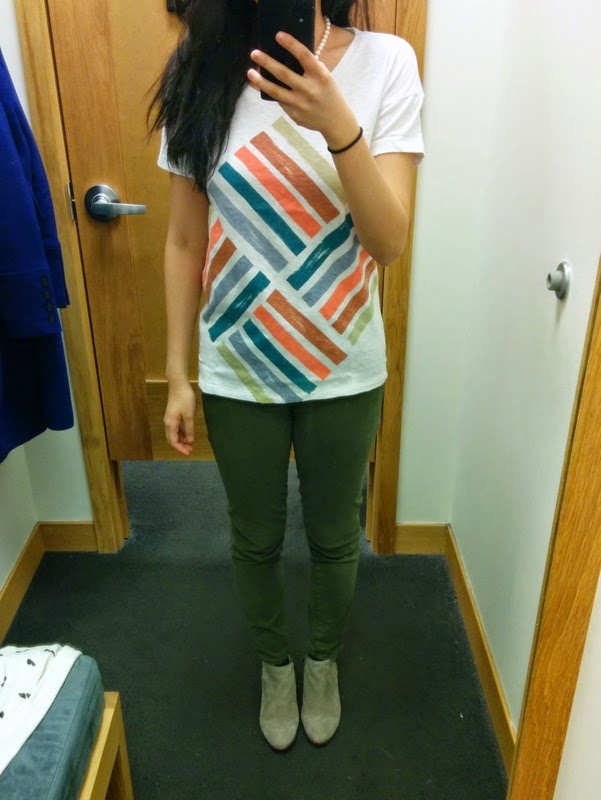 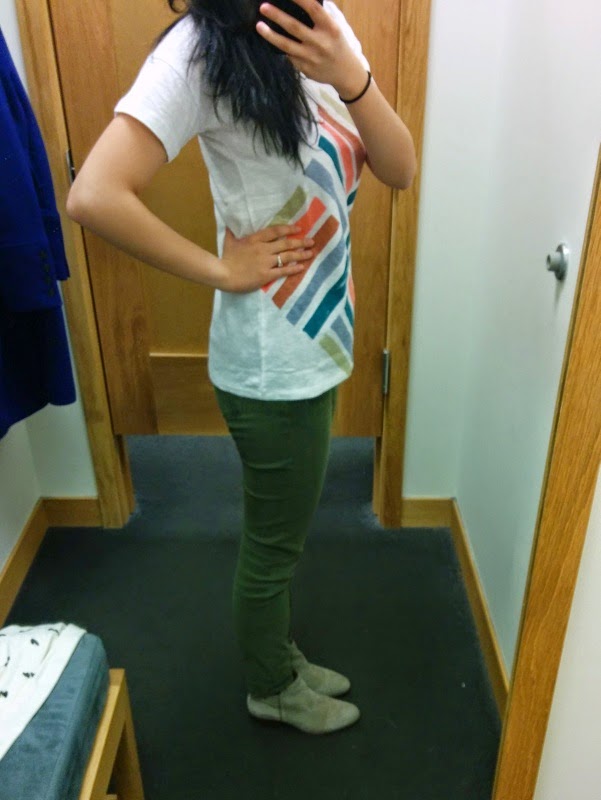 Oh boy. First of all, this tee feels quite substantial. It's medium weight and could serve as a winter layer. Because the fabric is so thick, the white background is almost completely opaque, which is a refreshing change from the sheer tees that J.Crew has been rolling out over the last few seasons. But why the drop shoulders? They don't make any sense here and visually widened my frame. The torso was very boxy. The pinwheel pattern was reminiscent of a swastika. The colors said summer more than winter to me. Needless to say, this was my least favorite tee out of the four. 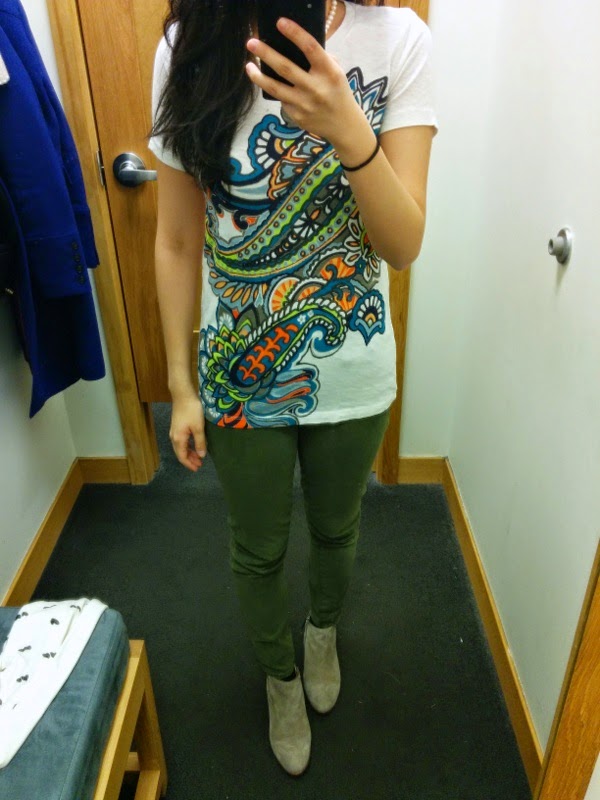 I didn't see this on the website, so I just made up a name for it. If it shows up eventually, I'll update it here. Anyway, this is the Factory version of the moonglow paisley tee. I vaguely remember trying on the retail one, and the colors weren't as saturated as they are here. In fact, these colors are almost too saturated to the point of being garish. The pattern sort of disturbs me. My brain keeps seeing weird shapes in it, like fish or dragons or bugs. Overall, the shirt was too long, and the white background was somewhat sheer. If you like the graphic and you're tall, this might work for you. Personally I'll pass. 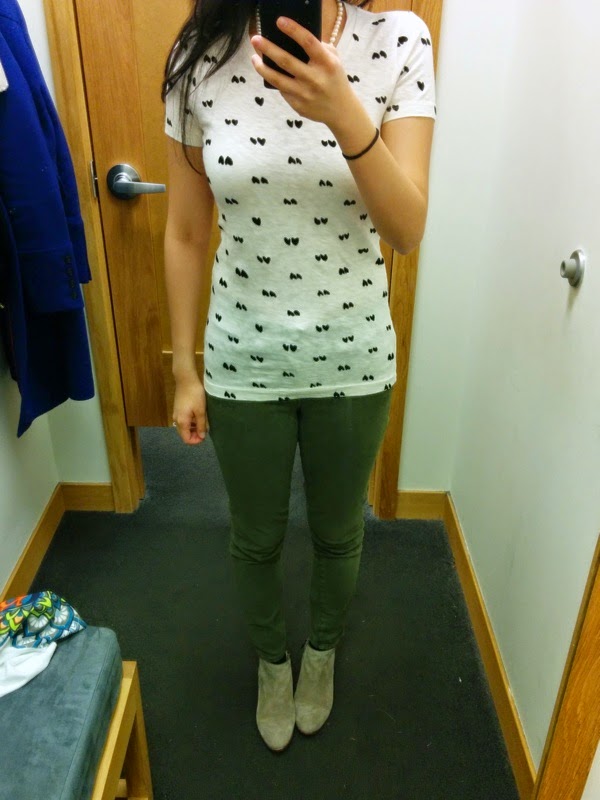 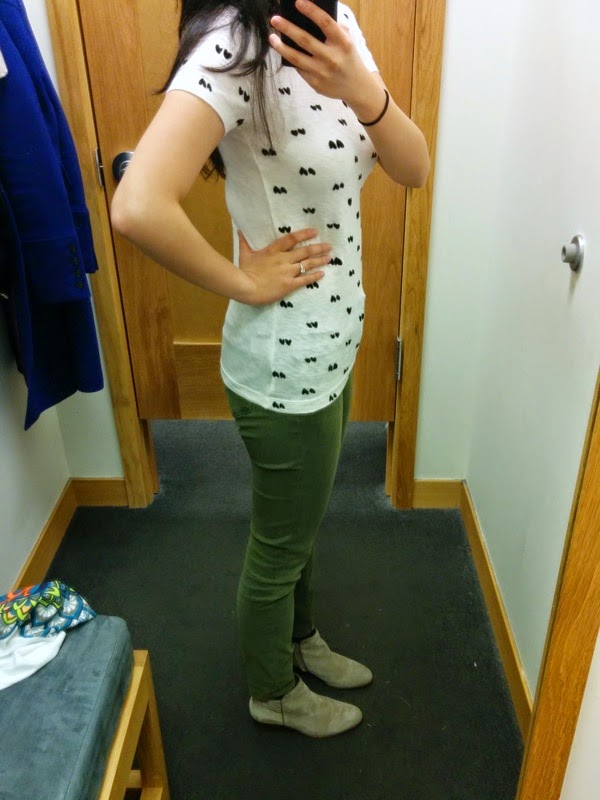 It's hard to see here, but this tee is ivory and not white. On the website, it looked like the little hearts were simply painted on. In reality, they're attached to the shirt, which produced a 3D effect that I liked. This tee was just a hair tight on me, and I would feel uncomfortable wearing it out in public as is. If you want to achieve that casual slouchy look, I would definitely size up. If you like your tees fitted, then stick with your regular size. I do wish the hearts continued around the back. That would look cuter. Also the ivory background could stand to be a little more opaque. Here I'm wearing a nude bra, and I can still see it in the pictures. Overall, cute but not a must have.

Are you a fan of the Factory collector tees? Also, stay tuned for more Factory reviews later this week!