I hope everyone had a good Thanksgiving! Engineer W and I spent it by ourselves instead of visiting family. On the one hand, it was a bit lonely, but then again it was rather nice to not have to travel. This year we made our first ever complete Thanksgiving meal. It was a lot of work, but the results were worth it. We decided to go with Cornish hens over turkey since two people can't really finish a giant bird by themselves.

On Black Friday I "accidentally" overshopped online. I'm embarrassed by how much stuff I ordered for myself (in addition to the stuff I mentioned in my last post!) when I was supposed to focus on buying gifts for other people and save my money for the after-Christmas sales. I blame popbacks at J.Crew and the 50% off no exclusions sale at Gap. Sigh. Maybe most of my purchases won't work out? Apparently I have terrible self-control, so that's my last hope.

Today I have some reviews to share, in case anyone is thinking about picking up a few more things at J.Crew. For reference, see my measurements here. Away we go. 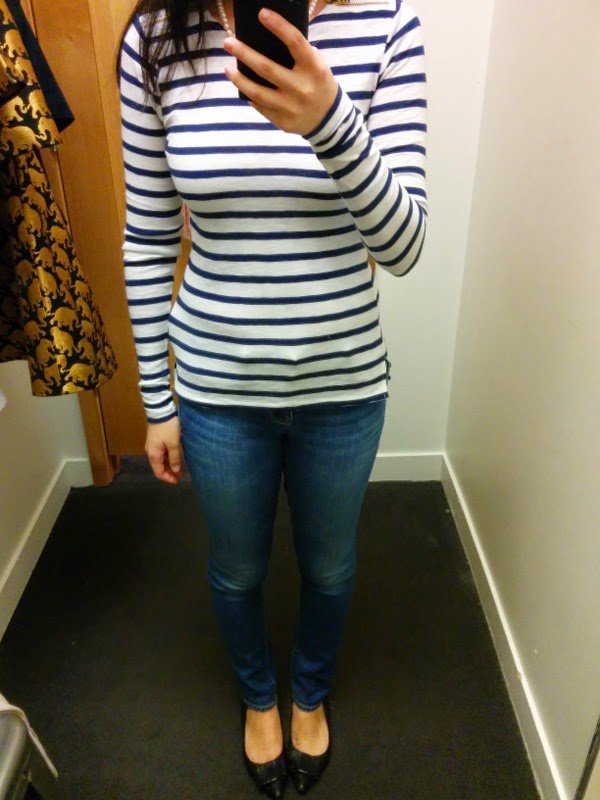 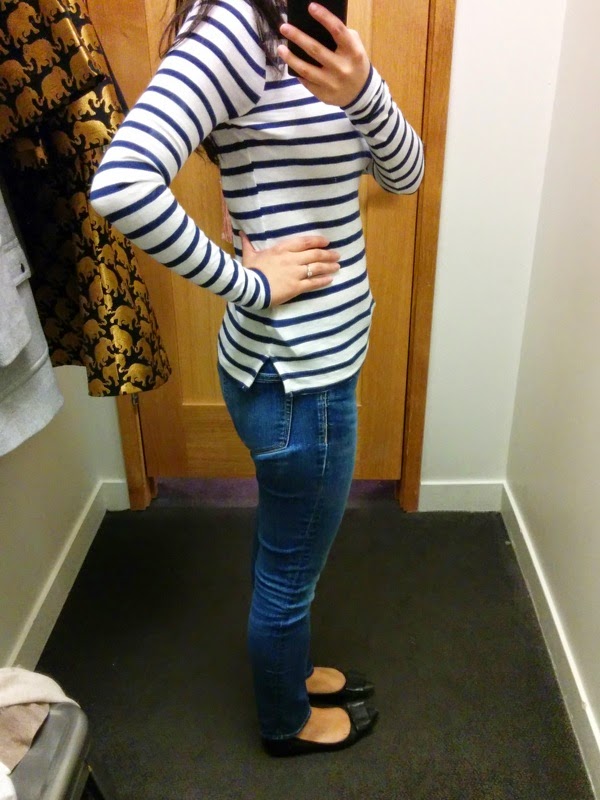 I like a good stripe tee, and this mostly white top with thin navy stripes was no exception. Not too thin or sheer (although I was wearing a nude bra at the time, so not sure how a black bra would show up). One minor gripe is about the side vents. I just don't like them on tees. Also the zippers on my shoulders felt cold, so I could see dreading that on cold mornings. My usual XXS was pretty fitted in the shoulders and torso (slightly in the arms), but then again I do have broad shoulders. Personally I would go in store, try on all of the xx-smalls they have, and pick the one with the best fit. 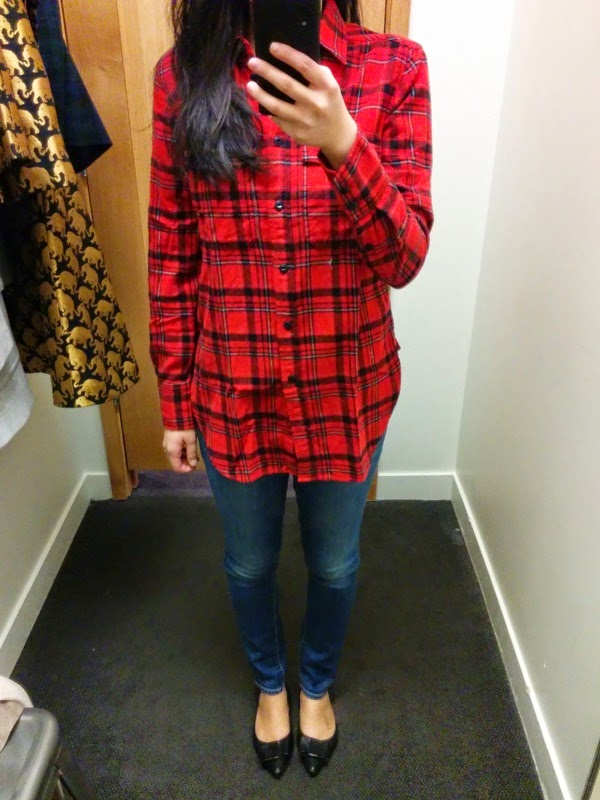 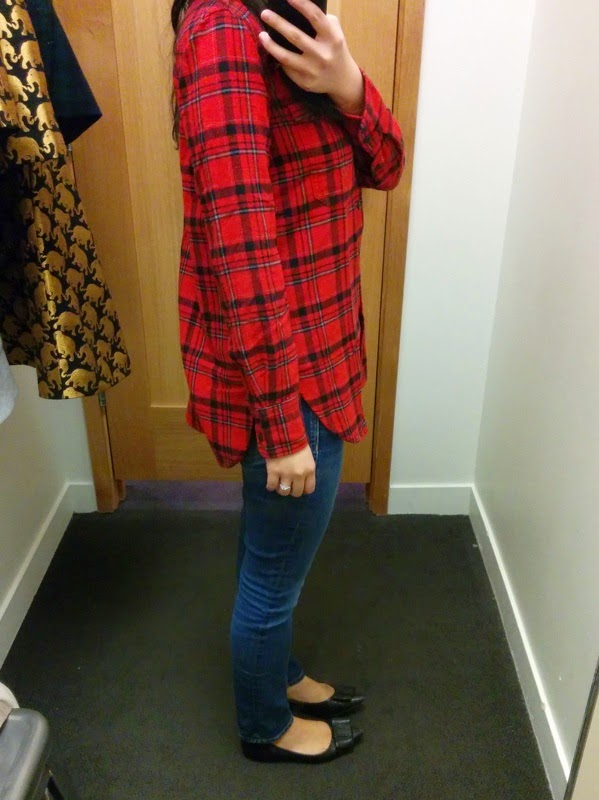 This shirt was a hot mess. I tried on my usual 00, and the shape was just sack-like. It fit fine in the shoulders and sleeves, but the torso was too boxy, and the shirt-tail vents were oddly high on the sides. I don't like this overly long shirt trend at J.Crew, so I hope it goes away soon. The one nice thing about this shirt is that the flannel material does feel decently thick and cozy. Maybe taller ladies can pull it off. 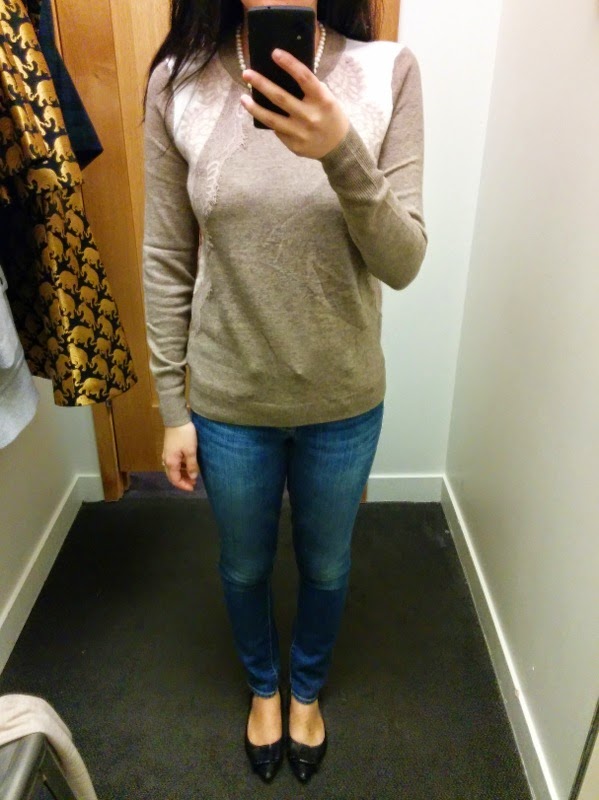 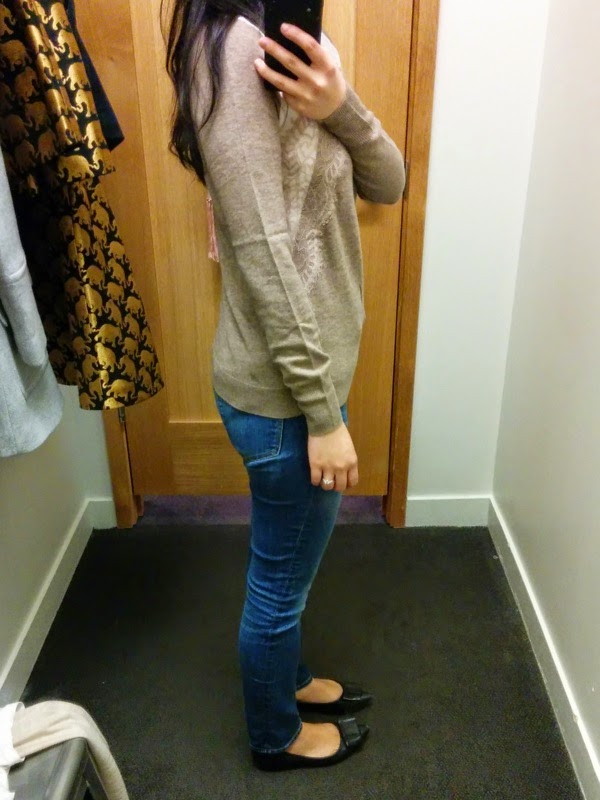 This sweater was nondescript to the point of being plain. The fit was good and true to size. I'm glad it's not plagued by the drop shoulders that most J.Crew sweaters have this season. The pink lace was pretty, but I felt ambivalent about the cream patches near the shoulders. The wool was thin and a little itchy, but I was wearing it against bare skin. If I had on some kind of underlayer, it probably wouldn't bother me. 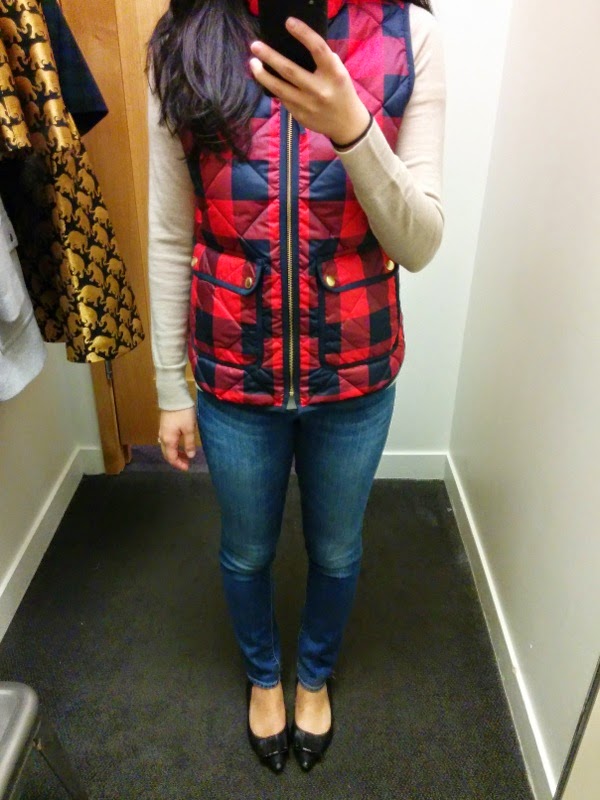 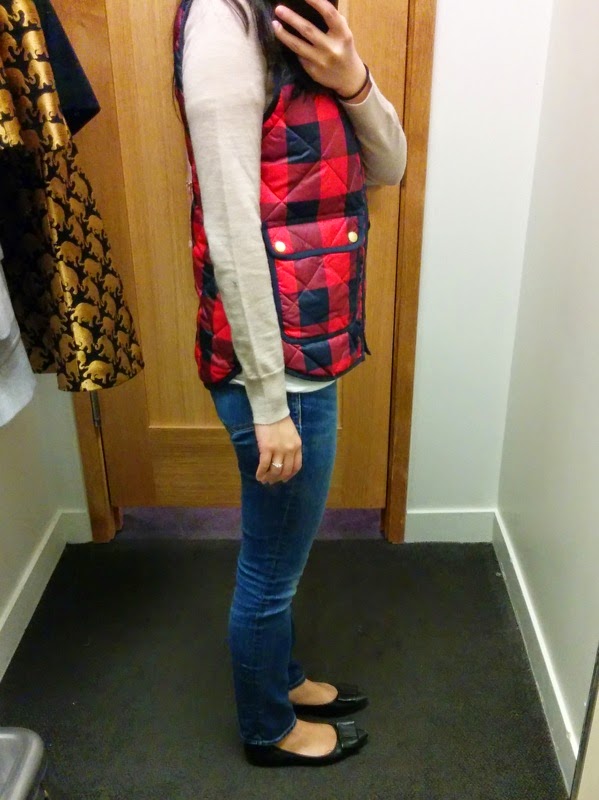 I love buffalo plaid, and I love J.Crew's puffer vests, so this version should have automatically been a winner. In reality, I like it, but I'm not in love with it. The colors are red and navy, not red and black like the Factory version. This vest has patch pockets, but I prefer the slanted pockets of the Factory vest. The fit on the particular XXS I tried on was actually better than other excursion vests I've tried. It wasn't fitted per se but at least tailored. Still boxy though albeit with slightly better fit in the armholes and torso. My main issue with it is that the one I tried on had a weird smell. Kind of like wet dog meets chemical plastic. Could be a one-off issue or could be similar to the puffer vest issue that some JCAs have reported. 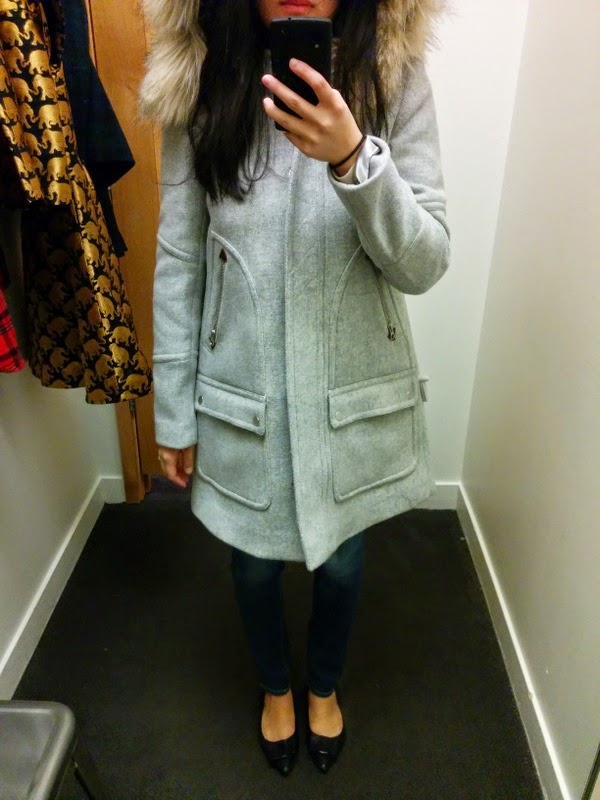 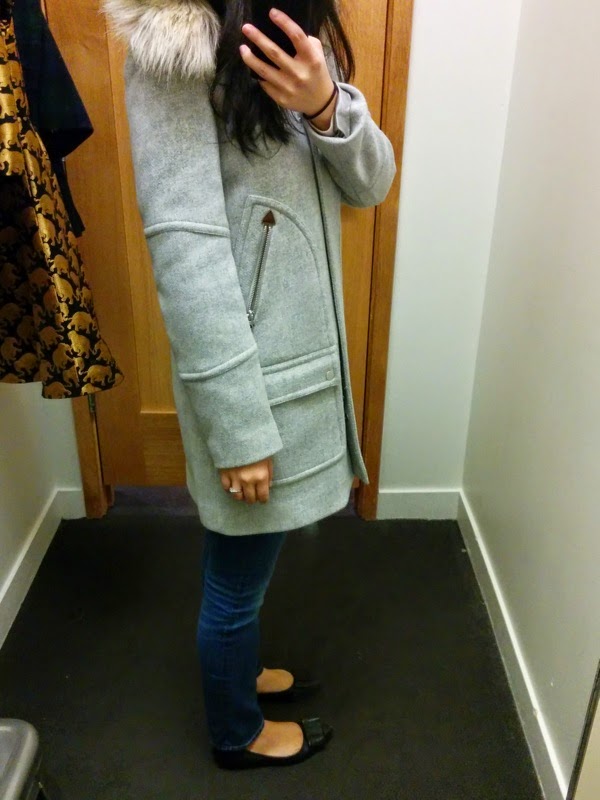 This coat has gotten great reviews around the blogsphere, and I was curious to see what all the buzz was about. There are 6 different colors available on the website, but I only noticed this one at my local store. Upon trying a 00, I see what the big deal is. The coat has a lot of room in the torso for layering without looking boxy. The stadium cloth wool is deliciously plush. I really liked the big roomy hood and even the faux fur ruff, which was soft (not stiff like some other faux furs). With the hood and longer length, I think it's a solid option for winter as far as wool coats go, although not great for super cold places. There are two sets of pockets, both of which were comfortable for me to put my hands. Sadly I don't need yet another coat, but I would seriously reconsider if this goes on sale.

How was your Thanksgiving? Did you buy anything for Black Friday and/or Cyber Monday?
at December 02, 2014