June ended up being a pretty spendy month for me. I originally planned to go on a shopping ban as I mentioned in this post, but I caved after only two weeks. Part of the reason I failed was that I really was missing some summer essentials, such as tank tops and sun protective clothing. The other part is that I've been under a lot of pressure lately, since I'm trying to finish my dissertation as well as look for jobs. When I'm stressed, I tend to stress-shop, and I could definitely see that effect this month. I read somewhere that you only have so much willpower/self-control every day, and if you use it up in one area of your life, it's very difficult to exercise self-control in another area. For example, if you've been working really hard and feel exhausted, you may have a harder time saying no to that ice cream or cupcake. My kryptonite is clothes and stuff for my hobbies. Anyway, I decided that I still want to attempt a shopping ban at some point, but maybe when things aren't so hectic. Here's my budget breakdown for the month of June. 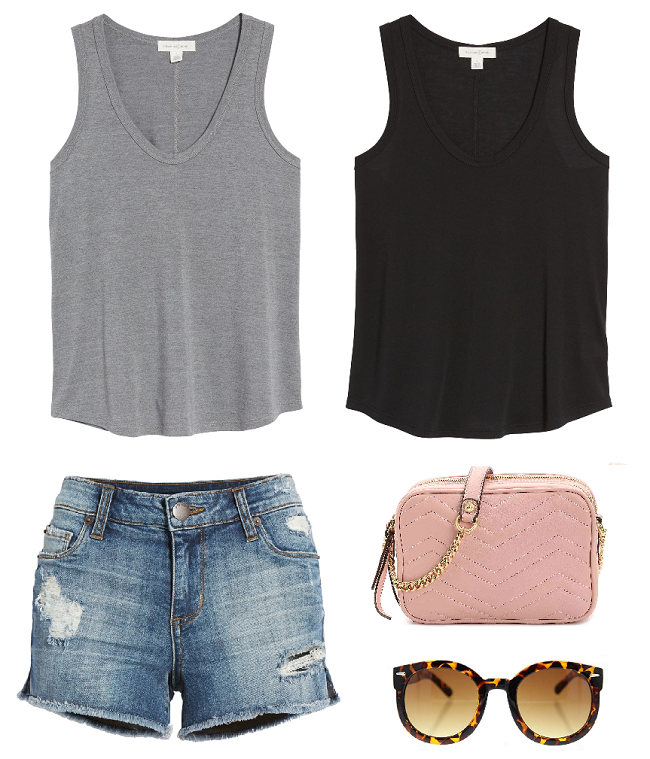 Treasure & Bond u-neck tank (grey dark heather and black XXS) - As you guys know, I rarely buy anything full-price. However, I make an exception when I find the perfect item. In this case, I've been on the hunt for the tank top (scoopneck, soft, and flowy but not shapeless) for a long time. I wanted to replace an old Everlane one that I wear all the time, which now looks faded and has a bunch of tiny holes in the front. I found this version with the perfect neckline and fit, so I had to snap it up. I ended up liking it so much that I ordered the other colors too (but I'll be returning the white one because it's too sheer). I haven't washed it yet so I don't know how it'll hold up over time, but so far I love it. The material is a modal/polyester blend, which makes it super soft. Go with your regular size for a flowy fit, or size down for a slimmer fit. Originally $25 x 2. Paid $27.23 x 2 = $54.46.


STS Blue distressed denim shorts (clemson 25) - I have been wearing these shorts nonstop since I got them. They're soooo soft and comfortable, which is incredible considering that they're denim. The material is nice and lightweight to help you stay cool in the summer heat. Some people may not like the short inseam (~2") and/or the distressing, but I love their carefree vibe plus they make my legs look super long! Note that they do run large, so you could either size down or go with your regular size for a slightly oversized look like I did. I like them so much that I'm keeping them at full-price. Originally $39. Paid $42.47.

Sam Edelman Lora crossbody bag via DSW (light pink) - I've been looking for a light colored bag in either white, ivory, or blush for summer. I tried out a couple options, but none of them were quite right (too small, too big, wrong vibe, etc.) Then I came across this very reasonably priced blush leather bag from Sam Edelman. I like the camera bag silhouette, the quilting, the gold hardware, and also how spacious it is! It doesn't look much larger than my Rebecca Minkoff bag, but it actually has a lot more space and much better interior organization (two zip compartments, one with an inner zip pocket and one with an inner slip pocket). Anyway, I'm looking forward to wearing it all summer long. Originally $178. Paid $54.44.

Knock-off Karen Walker Super Duper sunglasses via Amazon (tortoise) - I lost the pair I bought back in 2014 so these are a replacement. They're cheap, offer UV400 protection, and cover most of my face. Not the highest quality, but you get what you paid for. Originally $9.99. Paid $9.99.

I decided to return the casual knit dress I linked in this post. Even though it was flattering in the front, it's actually somewhat sheer in the back. I didn't notice this until I wore it outside for the first time. I could see the color of my underwear, even though the dress is dark, as well as the dreaded visible panty line. Also, the hem has a tendency to ride up as you walk around or sit down, which is annoying when the dress is already plenty short. Anyway, the situation was so bad/embarrassing that I had to go home to change during lunch. So I cannot recommend this dress after all. What a shame when the front is so flattering. 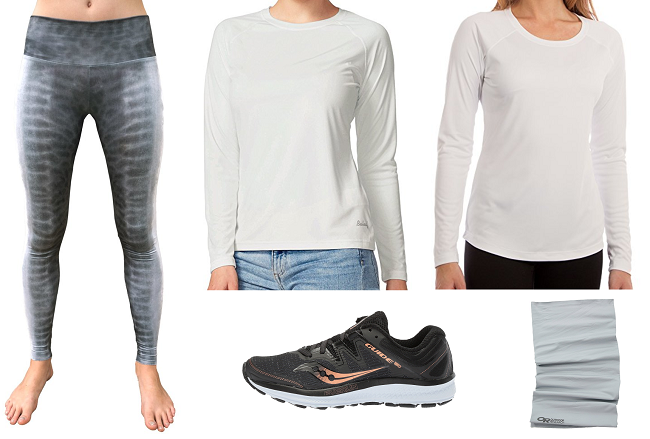 Since I've been spending a bunch of time outdoors in the sun (sailing, beach, etc.), I decided to finally buy some sun protective clothing. It's way more convenient than reapplying sunscreen every 2 hours.

Waterlust tiger shark trailblazer leggings (XS) - My boyfriend actually recommended this brand to me. They sell environmentally responsible products to support marine science research. My leggings are made from recycled polyester from plastic water bottles and help support shark research. They're also UPF50+, making them great for outdoor water sports. Don't you love the print? I feel like a tiger shark when I wear them, haha! Fit is true to size, but they're a little long so they bunch a bit at my ankles (my inseam is 30"). Originally $65. Paid $71.

Baleaf sun shirt (white S) - This was the first sun shirt I bought, and it does the job with its UPF50+ rating. Runs small. Not my favorite though, because it can get kind of hot in the sun since the material is a little on the thick side. Sadly I can't return it since I already wore it a couple times. Originally $16.99. Paid $16.99.

Vapor Apparel sun shirt (white S) - This is the second sun shirt I bought, and I like it much better. Same UPF50+ rating, but the material is thinner and doesn't seem to get as hot. Also the fit is slightly more feminine. Runs small so size up. Originally $22.95. Paid $22.95.

Saucony Guide ISO road-running shoes via REI (black/denim/copper 6) - Now that summer is here, it's too hot for me to bike outside unless I go super early in the morning, and I'm really not a morning person. I still want to get in some cardio though, so I started running in my building's gym about twice a week. (Even though I hate running, I can't deny that it really is the most convenient form of cardio. You can do it anytime at your own pace for whatever length of time you'd like, and if you run indoors, it's climate-controlled.) At first I just wore my 7-year-old Asics shoes, but I quickly discovered that I was getting foot/knee pain and decided to upgrade (while also focusing on better running form). I tried out 4 different pairs and ultimately settled on this one, because it was the most comfortable and offered the best stability/motion control when I did a few test laps around the store (yes, people were giving me odd looks...). I've worn these babies about 4 times. So far so good. Bonus: the color goes with everything! Originally $120. Paid $117.61.

Outdoor Research ActiveIce ubertube (alloy) - This gaiter is a lifesaver in really hot weather. I wet it thoroughly in cold water and wear it around my neck to protect against sunburns as well as cool me down. One size fits all. Originally $22. Paid $19.59.


What were your favorite purchases this month? Do you like sunwear or sunscreen?