I hope everyone had a good Thanksgiving! My own was very restful. My fiancé and I stayed home, made delicious food, watched The Godfather, and shopped online. Speaking of shopping, this month was a pretty spendy one for me. Luckily I've been under budget all year, so I'm still on track for 2015. Anyway, here's what I bought in November. 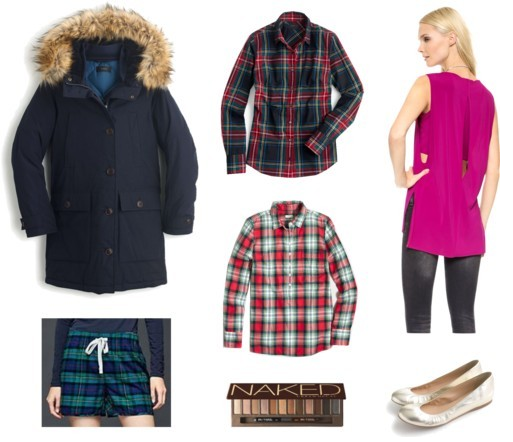 J.Crew Nordic parka (navy XXS) - This coat is one of my most expensive purchases ever! That's okay though, because it's one of the warmest parkas available that's still relatively stylish and affordable. My only complaint is that it's very heavy, but overall I love it. (Check out my detailed review here.) Originally $450. Paid $450 + $152.91 off promo + 3% off ebates = $288.18. 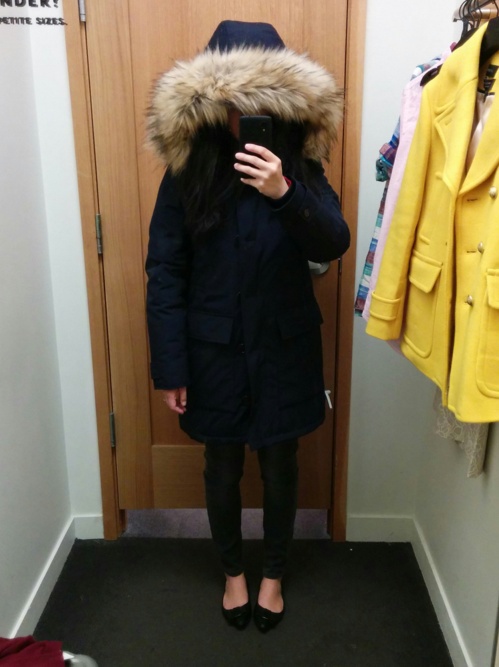 J.Crew perfect shirt in Stewart plaid (black 00) - I very rarely buy J.Crew at only 30% off (I consider that to be basically full price), but I was worried that I'd have major regrets if this beauty sold out. It runs small, but I took my usual size, which fit perfectly since I have a straight up and down figure. On a sidenote, I'm so glad J.Crew brought back the perfect shirts! That was one of my biggest complaints in the past few years. The boy shirts they sell just don't work for me. Anyway, I hope they keep this up. Originally $78. Paid $78 + 30% off + 5% off ebates = $51.87.

J.Crew Factory plaid popover shirt in flannel (poppy grove XXS) - A flannel shirt is on my fall/winter wishlist, and this Christmas-y one seems to fit the bill perfectly. I found it true to size, maybe a hair small. Similar to other J.Crew/Factory flannel tops, the flannel is thin but good for layering under sweaters. Originally $69.50. Paid $29.95 + 20% off + 4% off ebates = $23.00. 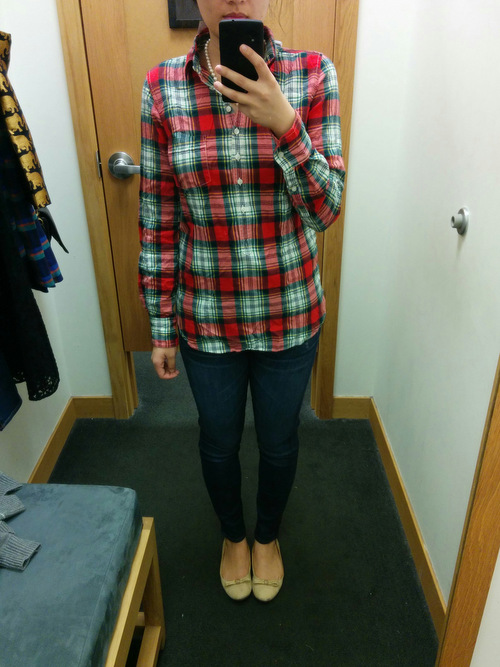 Urban Decay Naked palette - I've wanted this eyeshadow palette for the longest time but couldn't justify buying it when I already owned the Too Faced Semi-Sweet Chocolate Bar. Ultimately I decided to get it for myself as a reward for submitting my research paper, which was perfect timing since beauty.com was having a 20% off everything friends & family sale. Originally $54. Paid $54 + 20% off + 4% off ebates = $41.47.

Helmut Lang faint sleeveless jersey top (fuchsia P) - This top was my biggest score of the month. I found it in the clearance section of Nordstrom Rack earlier this month during their Clear the Rack sale. I really like the design, which is modest but interesting with the peekaboo cutouts. The fabric is very cool to the touch, which I think would be perfect in the warmer months. We'll see how much wear I actually get out of this top next summer, but luckily it's not too expensive that I'd have major regrets. Originally $265. Paid $29.90 + 25% off = $22.43.

J.Crew Cece metallic ballet flats (metallic platinum 6M) - I don't own the original Ceces, but I have tried them on a few times before. Despite no longer being made in Italy, these new Ceces feel pretty comparable in quality to me. They're a hair tighter in the toebox but still comfortable and true to size. I love the metallic platinum color, a beautiful blend of gold and silver. Originally $135. Paid $115 + 50% off + 5% off ebates = $54.63.

Here are a few items that didn't work out for me:

1) J.Crew buffalo plaid scarf (ivory) - This scarf was very warm and thick, and the pattern was beautiful. Unfortunately it was also very itchy! I'm normally not sensitive to wool at all, but I couldn't handle how prickly this felt against my neck. Maybe that's just an issue with this colorway though, since one of the online reviews mentioned that the red/blue combo was very soft.

2) Woolrich patrol down parka (deep navy XS) - I really really really wanted this coat to work out.  I bought it for ~$260 on Black Friday from Amazon, and it's without a doubt the single warmest coat I've ever tried (90% goose down/10% goose feather, 650 fill power, real coyote fur trim). However, the torso was quite boxy, and the hood was too small for my big head. Comparing it against my J.Crew Nordic parka, it's much frumpier, which sort of defeats the purpose of me getting a new coat in the first place.

3) I returned the Sorel winter boots I bought last month. I kept having second thoughts about them, which is a surefire sign that they're not right for me. I decided that I wanted a pair of L.L. Bean boots after all, so I contacted L.L. Bean's customer service to ask for suggestions for smaller sized Bean boots. They recommended the kids' boots in size 4, which is supposed to be equivalent to a women's size 6. The kids' boots are rumored to run true to size as opposed to one size large like the women's boots. Unfortunately they're backordered until next April! Oh well, the waiting begins...

As always, I'm linking up with Franish and the other Budgeting Bloggers! How did you do on your budget this month?

It seems like I just made my summer wishlist for this year, and now it's already late fall. As the weather turns colder, I'm on the lookout for warm and cozy things to add to my wardrobe. 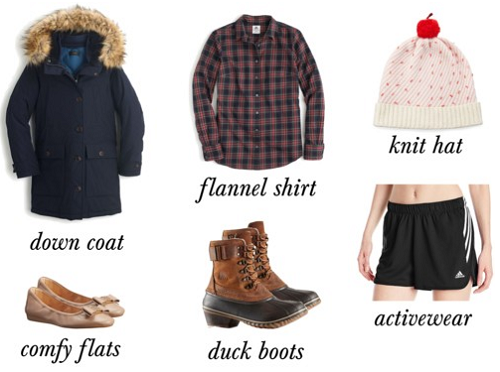 1. A warm and stylish down coat
I mentioned in this post that I hate my old winter coat, which I've had for over 4 years. A few weeks ago I started looking for a replacement and went in store to try on some possible contenders. My favorite two were the Canada Goose Trillium and the J.Crew Nordic parka. Since I don't currently have $745 to spare, I decided to get the J.Crew parka during a 35% off promo. I'm very happy with my decision! I really can't say enough good things about it, and I'm super excited for the weather to turn colder so I can break it out!

2. Duck boots
I really wanted a pair of duck boots this year! Last month I bought these Sorel ones that Jean recommended, but I wasn't sure if I should keep them or order a pair of L.L.Bean boots. (Thanks to Xin from An Invincible Summer and Jasmine from Making Restorations for their detailed answers to my questions about Bean boots!) The Sorel boots are very warm, but since they're so insulated, I can only really wear them in the winter. On the other hand, Bean boots could be worn for three seasons, but right now they're backordered for so long that winter will be over before they even ship! Anyway I'm still undecided. What do you think?

3. Cute knit hat
For some reason, I have a lot of scarves but very few hats. I know my new coat has a hood, but most of my other coats don't. It would be nice to get a hat that's both cute and warm. Maybe something with pom poms?

4. Activewear
Back in January, I made two resolutions for 2015. One of them was to work out more. I'm happy to report that I've stuck with it! Right now I go to the gym about 2-3 times a week. However, my workout gear hasn't kept up. I really need a few more workout tops and shorts, especially ones that don't have those dreaded internal briefs.

5. Plaid flannel shirt
Is there anything more delicious than wearing soft cozy flannel in the winter? I have my eye on this medium-weight jewel-toned version.

6. Comfortable flats
My favorite flats (the Me Too Patty - I have two pairs!) are looking pretty shabby these days. Since they're so comfortable, I wear them almost every day, and it shows. I would love to get some comfortable, reasonably stylish neutral flats to replace them.


Heavy-weight sweater
Most of my sweaters are light- to medium-weight, so I'd love to add a cozy chunky sweater to the mix.

Leather cognac booties
I love wearing booties, and I already own two pairs in black and taupe suede. It'd be great to add a cognac leather version.


Should I keep the Sorels or order the Bean boots? Also, what's on your wishlist this season?