Where did this month go? It seems like August just began, and now it's almost over. Oh well, time to start wardrobe planning for fall! 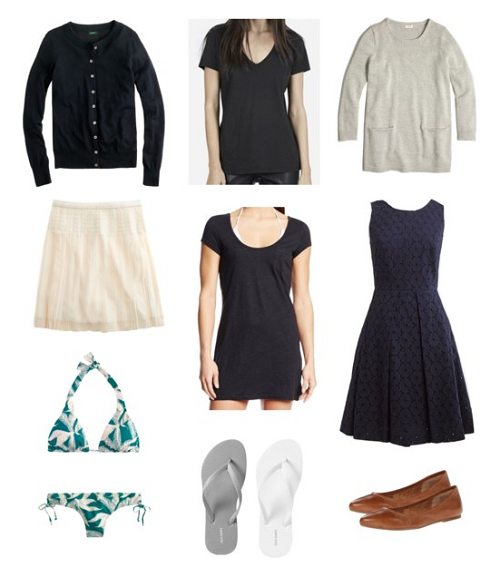 As I mentioned in my July budget post, I placed a huge order with J.Crew last month during their 75% off sale. I was worried that the crazy low prices would sway me to keep items that I otherwise wouldn't, but in the end I had enough will power to return the things that I didn't love. It helped that I had just purged my closet and was in the midst of getting rid of everything. For the most part, those piles of unworn clothes (some of which still had their tags on!) killed my desire to accumulate more stuff that I felt lukewarm about. However, there were still a few winners from the order.

J.Crew merino wool Tippi cardigan (black XXS) - I love the Tippi cardigans and wear them year round. I already kept one black cardigan last month but thought it wouldn't be a bad idea to have a backup, especially since I've already worn the original one a few times. Originally $85. Paid $59.99 + 75% off + 1.5% off ebates = $14.77.

J.Crew tropical fern side-tie bikini bottom (tropical forest XXXS) - The sizing for this bikini bottom is ridiculous. It's labeled as an XXXS but fits more like an XS in my opinion. Normally my bottom half is only one size off from my top half, so I'm confused by the way this is labeled. That aside, I like how it also stays put in the water (no sagging when wet) and has full back coverage. Originally $50. Paid $29.99 + 75% off = 1.5% off ebates = $7.39.

My collection of v-neck Everlane tees just keeps growing! I've been adding more as my J.Crew tees wear out.

Everlane cotton v (muted black XS) - This is my favorite out of the three Everlane tees that I own in terms of fit and opacity. Originally $15. Paid $15.

Earlier this month I went on a beach vacation with friends, so I bought a few things for the occasion. By the way, here's a picture I took of the sky on a particularly beautiful day at the beach. 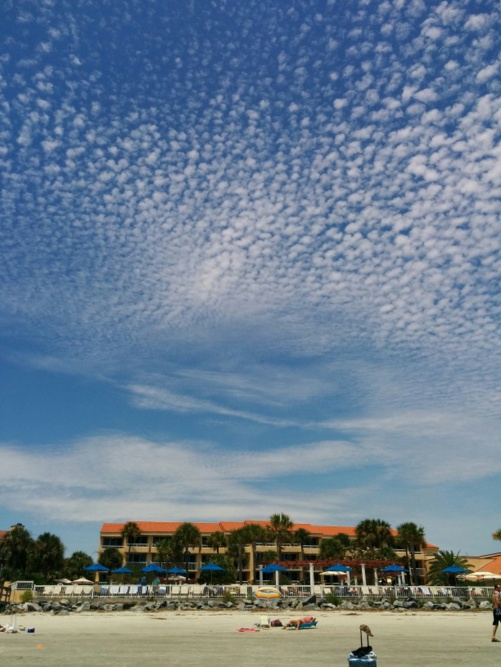 Speedo active slub jersey cover-up dress (black XS) - I wanted a simple affordable cover-up, and this fits the bill perfectly. It dries fairly quickly and can double as a tunic. A word of caution though: it's pretty short. Originally $44. Paid $8.07.

Old Navy classic flip-flops (white 6) - I usually buy black flip flops, because they don't show grime as easily, but the downside is that they get really hot in the sun. Since these were so cheap, I wanted to experiment with getting a white pair. They're a little dirty now, but they didn't burn my feet. Originally $3.94. Paid $2.50.

Not included here are my new beach towels, which I adore. They're made of lightweight cotton and dry super fast! I got mine on sale from Madewell, but they're also available here.

Last week I stopped in at J.Crew Factory for the first time in a long while. I was pleasantly surprised by two of the items that I tried on. See my detailed reviews here. 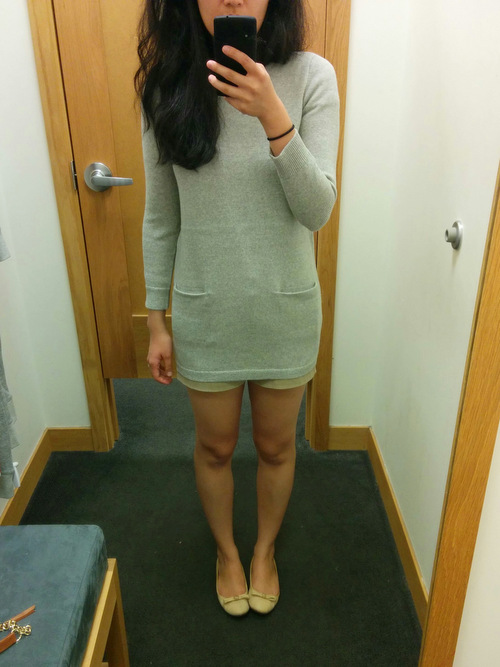 J.Crew Factory floral eyelet v-back dress (midnight shadow 00) - This dress looks sort of formal online, but it's actually a casual sundress. The lace overlay is very pretty, and the entire body of the dress is lined. To my relief, the skirt is more A-line than full. I love that it's 100% cotton and machine washable too. Originally $98. Paid $58 + 30% off + 1.5% off ebates = $39.99.

Miz Mooz Bindi ballet flat (cognac 6M) - Cognac flats were on my summer wishlist, and I finally found my perfect pair. These have an almond toe, are made of leather, and required no break-in period. Unfortunately they also don't offer much arch support, but that's to be expected for flats. Originally $99.95. Paid $61.81.

That's a wrap for all the stuff I bought this month. I also sold 7 items on Ebay for a total of $89.09 after fees and shipping, and Thredup processed the closet clean-out bag that I sent in last month. They accepted 21 out of 31 items and paid me $27.85.

It's been a while since I last reviewed anything! That's because I haven't been shopping in stores much. Nowadays I do most of my shopping online. I know there are better deals to be found in store, but I honestly don't have the time to go regularly. Anyway, this past week I finally visited J.Crew Factory to do returns and check out their new arrivals. Only a few things caught my eye, but the things that did I really liked! For reference, I'm 5' 4", 32C-26-34. My usual size at J.Crew Factory is 00 and XXS. 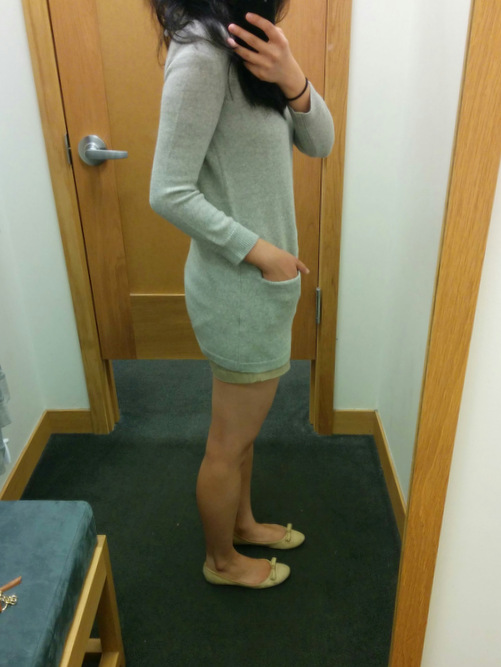 When I browsed the new arrivals online, this sweater completely flew under my radar. And who can really blame me? Online it looks extremely bland. Even in person, it didn't look very promising, sitting by itself all folded on a table. The only reason I tried it on was because it passed my handfeel test (I frequently walk around a store touching everything and only stop to pick it up if the material feels nice - I know, kind of weird). In the fitting room, I was pleasantly surprised! The torso was actually slouchy slim in a really good way. It wasn't boxy at all from the side. I would say it's true to size. The 100% merino wool was medium weight and felt fine against my bare skin (although I'm not usually sensitive to wool). The pockets didn't add bulk to my hips, and the length was good on my 5' 4" frame, which is my biggest struggle with tunics. My only qualm was about the sleeve length. The website says this sweater has long sleeves, but the one I tried on decidedly had bracelet sleeves. That wasn't a deal breaker for me though; I actually thought it worked with the tunic length.  Anyway, this one came home with me so I could try it on with other pieces I own. So far it seems to work really well with skinny jeans and leggings. 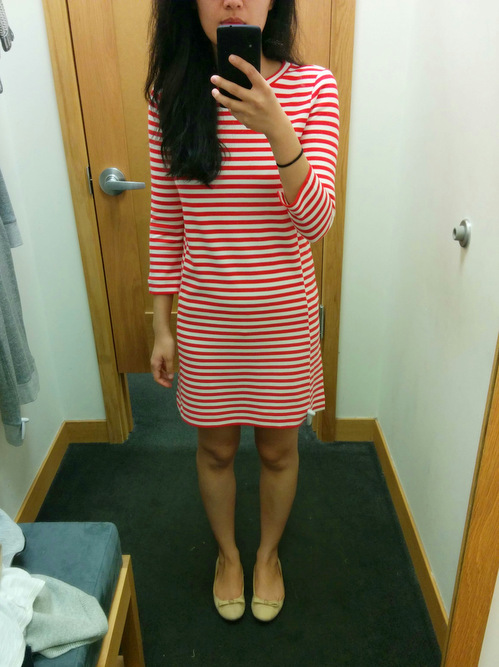 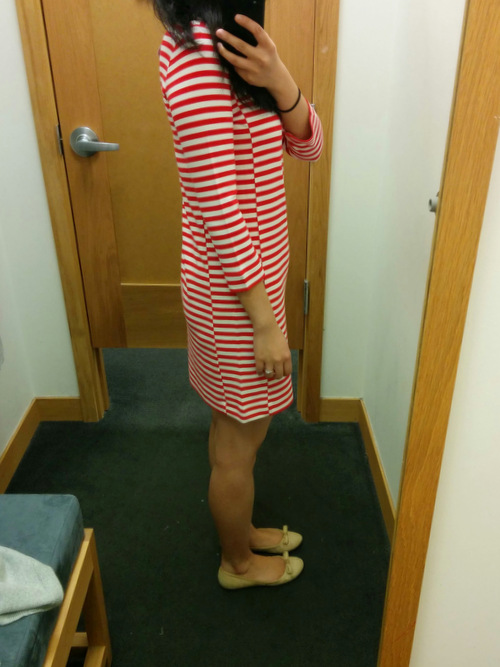 This slip on dress also passed my handfeel test. The ponte material is really soft, smooth, cool to the touch, and somewhat wrinkle resistant! That makes sense given its composition: 88% viscose, 10% nylon, and 2% elastane. It comes in two different colors: red/ivory and black/ivory. I only saw the red striped one in store, so that's the one I tried on. I found it true to size and not too mini, even though the hem does hit above the knee. It does a good job of skimming the body while not being too clingy. My favorite detail here is the contrasting side panel. If you look carefully, the sides are lined up so that each red stripe is matched up with an ivory stripe on the front and back. It's visually slimming, because those side panels extend slightly to the front, thus making the body look more narrow. Again, I take issue with the sleeves. The website claims this has bracelet sleeves, but they're actually 3/4 length. I find them to be a hair too loose, but I could always push them up to my elbow. Perhaps the biggest issue with this dress is that it's dry clean only. I feel like that would make sense for a nice silk or wool dress but not for something so casual. Also, wool items shrink due to heat exposure whereas rayon/viscose shrink due to water exposure. Hence, you can get away with handwashing wool in cold water, but that's not an option for rayon/viscose. If anyone knows of other cleaning options, please let me know! Otherwise I may have to return this dress.

Verdict: Like, true to size, but dry clean only.

What are your thoughts on dry clean only for non-silk/wool items? Have you found anything you liked at J.Crew Factory lately?
at August 22, 2015 6 comments: