I came in almost exactly on budget in June, but I'm actually a little disappointed. I was hoping to be significantly under budget since I also spent a bunch of money on a new hobby this month (which I'll talk about in a later post). Several pieces I picked up are duplicates of things I already own and like, which is sort of boring but works for me. Anyway, let's get started. 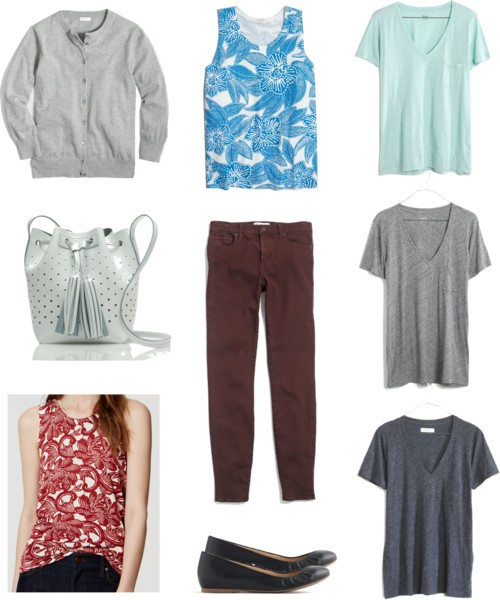 J.Crew Factory Clare cardigan sweater (heather gray S) - I bought a navy Clare cardigan back in March, and I've been wearing it to death lately. It's just the perfect layer for those times when it's super hot outside but freezing cold indoors. The one regret I have is that I bought it in XS, one size up from my usual XXS. Since it's 100% cotton, it ended up shrinking in the wash, and now I can't really button it. I knew I wanted a heather gray cardigan next, so this time I went up TWO sizes. Hopefully it won't shrink too much this time. Alternately you could wash it in cold water and flat dry, but who has the time? Originally $54.50. Paid $27 + 35% off price adjustment + 1.5% off ebates + $12.52 rewards = $4.77.

J.Crew Factory floral printed tank top (seashore white XXS) - This is the first of two floral tank tops I picked up this month. I've already worn it a few times. I like that it's opaque, has a looser almost tunic-like fit, and is made of 100% cotton. For those of you who like more fitted tops, you can probably go down a size. I bought my regular XXS, because I don't like to wear anything tight in the summer. It just gets too hot. Originally $39.50. Paid $19.50 + 35% off price adjustment + 1.5% off ebates + $12.48 rewards = $0. 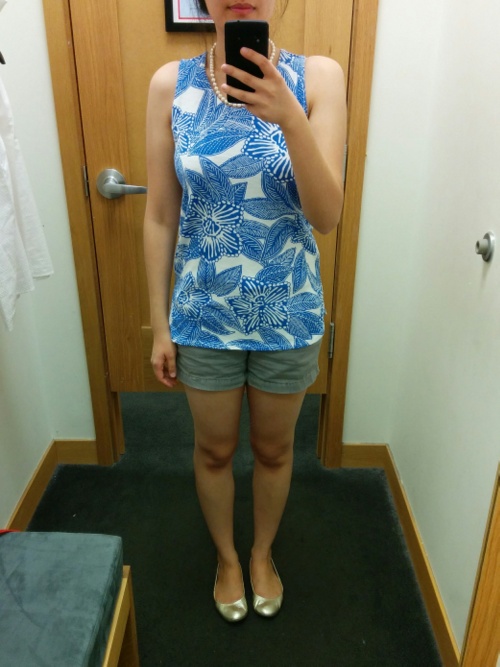 Madewell whisper cotton v-neck pocket tee (faraway sky, heather pewter, and heather indigo XXS) - I bought one of these tees in heather pewter in May and declared it my new favorite. Since I liked it so much, I ended up buying 3 more this month. All three colors I kept were surprisingly opaque, and they all have the same slouchy fit I like. I also ordered a white one but ended up returning it, because it was too sheer (noticeably more so than the white Everlane v-neck tee). Originally $25 x 3. Paid $22.50 + 30% off + 1.5% off ebates = $15.51 x 3.

J.Crew bucket bag in perforated leather (white) - A white bucket bag has been on my wishlist since summer 2015! I just never found the perfect one until now. Enter this adorable mini bag in perforated leather from J.Crew. It has an adjustable shoulder strap, which is great for shorter ladies. The leather is pretty structured as opposed to a true bucket bag which should be slouchy, but I think that makes it easier to open up and find things. There's not really any interior organization, only a card slot, but the bag isn't big enough for you to lose stuff inside. So far I haven't worn it yet, because I'm looking for a leather treatment that protects against color transfer (which ruined my last white bag). Any suggestions? Originally $118. Paid $110 + 40% off + 3% off ebates = $64.02.

Madewell 9" high-rise skinny jeans: garment-dyed edition (chocolate raisin 25) - These pants are definitely a want, rather than a need. I already have a pair of maroon jeans, but they're more purple than red. These pants are more reddish-brown, so I think they'll be more versatile than my original pair. It's too hot to wear long pants now though, so I'll have to wait until fall to find out if I'll wear them enough to justify the cost. Originally $128. Paid $29.99 + 30% off + 1.5% off ebates = $20.68.

LOFT floral sweater tank (wild cherry XXS) - I like this floral tank even more than the one from J.Crew Factory. First of all, the print is so eye-catching. I wish the color scheme was a little more vivid. In person, it's more of a maroon and oatmeal rather than red and white as it appears in photos. Still gorgeous though. Secondly, the top is 100% rayon, so it has the most beautiful drape and it's super soft. I'm a little afraid to wash it so far since I know rayon shrinks in water. Overall, it's my favorite piece from LOFT in a long time. For whatever reason, LOFT usually doesn't fit me very well, even though I like their style. Originally $44.50. Paid $44.50 + 40% off + 2% off ebates = $26.17. 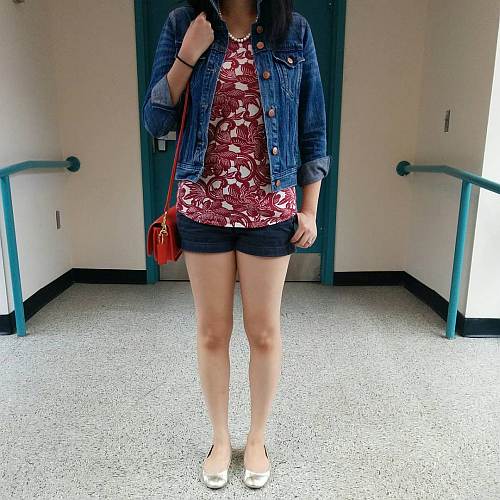 J.Crew Cece ballet flats (black 6) - As evidenced in the previous photos, I wear my metallic J.Crew Cece flats all the time. I thought it was time to add a plain black pair, especially since they were on super sale. I debated over whether I should keep them, because I only recently bought the Cole Haan Tali. However, the Tali has prominent gold embellishments on the toe, and some outfits call for more understated shoes. Originally $125. Paid $49.99 + 40% off = $29.99.