May has been the month of catching the one that got away. I was able to add two items to my wardrobe that I really really wanted originally but missed out on the first time around.

J.Crew merino scarf sweater (graphite ivory XS) - This sweater was a miraculous online pop-back. I missed out on it originally, because I ordered the wrong size (XXS which was too tight in the sleeves). The size up had sold out by the time I realized my mistake. A year later J.Crew Factory released their own version, which has since become my favorite sweater (it even made my favorite purchases of 2014). I had been kicking myself for not buying a backup when this showed up online. Unlike the one I already own, the retail version features the scarf print on both the sleeves and the back of the sweater. It's also thicker and plusher than the Factory one. I'm really glad I was able to get my hands on this! Originally $98. Paid $89.99 + 40% off + 1.5% off ebates = $53.18.

J.Crew textured cotton shirt in orange plaid (peri orange 00) - This button-down was a spontaneous in-store purchase. I saw my size sitting in the sale section all by its lonesome, so I decided to try it on and really liked the resulting look. I've already worn it twice since I bought it. The material feels like linen, although it doesn't seem to wrinkle quite as easily. The fit is a little flowier than a 00, but I like the drape. Originally $88. Paid $59.99 + 40% off + 15% student discount = $30.59.

J.Crew stretch toothpick Cone Denim jean in white (white 25) - You guys, I think I finally found my perfect pair of white jeans! And surprisingly, it's the same kind I've tried on twice before. As you may remember, I tried on these toothpicks in size 26 back in March and a different size 25 in February. The 26 was almost a keeper, but I didn't like how they were slightly too baggy. Anyway I decided to give these jeans one last chance, and to my surprise, they fit really well! Yay for J.Crew's inconsistent sizing? The only annoyance is that I was able to buy the jeans in size 26 for around $45 and ended up returning them before I tried on the current pair. If only I had exchanged them instead. Sigh. Oh well. Originally $115. Paid $115 + 25% off + 15% student discount = $73.31. 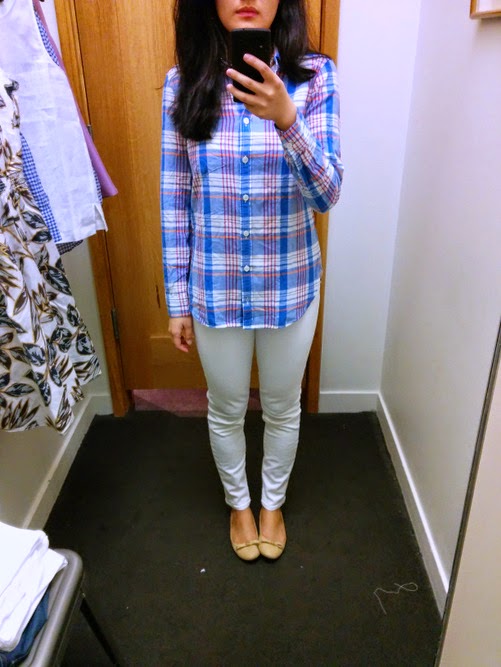 Everlane women's cotton v (white XS) - I've been trying to fill my wardrobe holes and realized I was missing a classic white tee, so I thought I would give this Everlane one a try since everyone on the blogosphere loves it. I wasn't sure what size I should order though; I thought I might be either an XXS or an XS. The sizing chart online only lists the dimensions for XS, so I decided to order both and just keep the one that fits best. As it turns out, they both fit, but the XXS looks sort of body con, so I settled for the XS which is more slouchy (like the way it fits the model in their online stock photo). Unfortunately, the first time I wore the tee, a blue cardboard box rubbed off on it, and despite laundering it, there's now a faint blue patch on the front. Grrrr. I do like the fit and material though, so I might purchase a replacement next month. Originally $15. Paid $15.

Falke pure matte 100 tights (black M) - I've heard really good things about Falke tights but never had an occasion to try them out since they were $59(!) a pop. In particular, these pure matte 100 tights received rave reviews for being actually matte, decently opaque, and quite warm. I wanted to see what all the hype was about, so I initially ordered a size S. That turned out to be a mistake, because they were way too short! I couldn't even pull them up past my hips. I suggest following the sizing chart on the back of the packaging. According to that, I should have gotten a S/M, but the M feels very comfortable and snug to me. Originally $59. Paid $44.99 + 40% off + 1.5% off ebates = $26.59 per pair x 2 = $53.18.

J.Crew tassel scarf (heather carbon) - I confess that I originally bought this as filler to get free shipping, but I actually really like it and plan to keep it. Obviously it's a cold weather scarf, so I'll be saving it for next year. It's warm, the grey color goes with all of my coats, and the tassels are nicer than I expected. Plus it was on super sale! Score. Originally $65. Paid $19.99 + 40% off + 1.5% off ebates = $11.81.

J.Crew no. 2 pencil skirt in porcelain paisley (navy 0P) - So this doesn't really count as a purchase, but I had to share because this skirt is my favorite item of the month! Possibly of the year. Porcelain paisley is my favorite print of all time from J.Crew, and I've been in love with this skirt for years. I missed out on it the first time around though (~2012), and I've been kicking myself ever since. A few times a year, I search for my size on Ebay, but it was either not available or at an usurious price. For my birthday this year, Engineer W was able to hunt it down for me! He's kind of awesome. 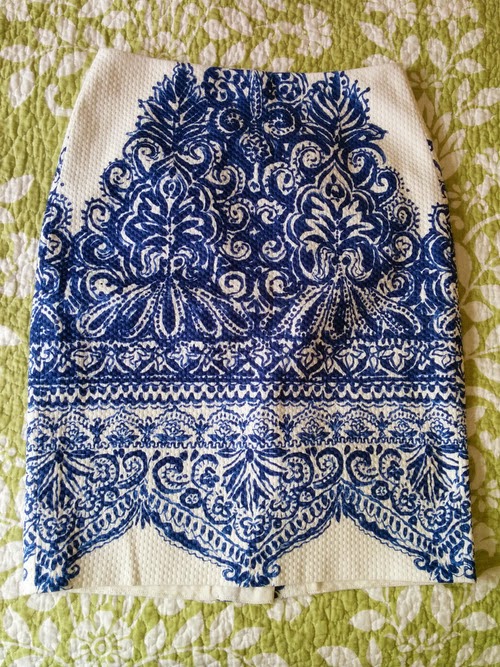 I stopped by J.Crew Factory to make a few returns yesterday and thought I would share two reviews of items that I liked. For fit reference, I'm 5' 4", 32C-26-34. My usual size at J.Crew Factory is 00 and XXS. 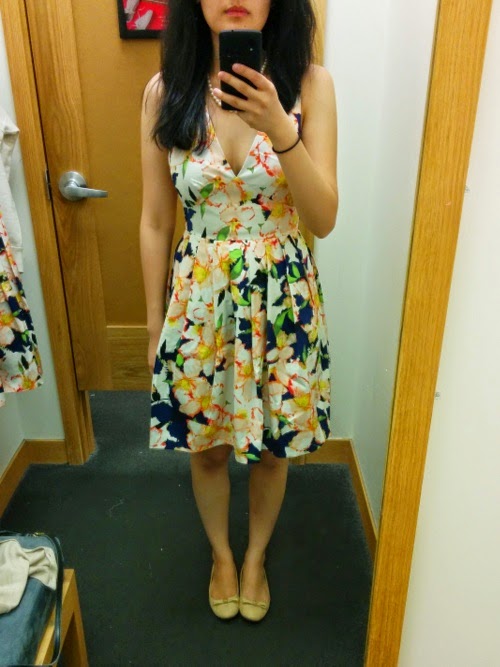 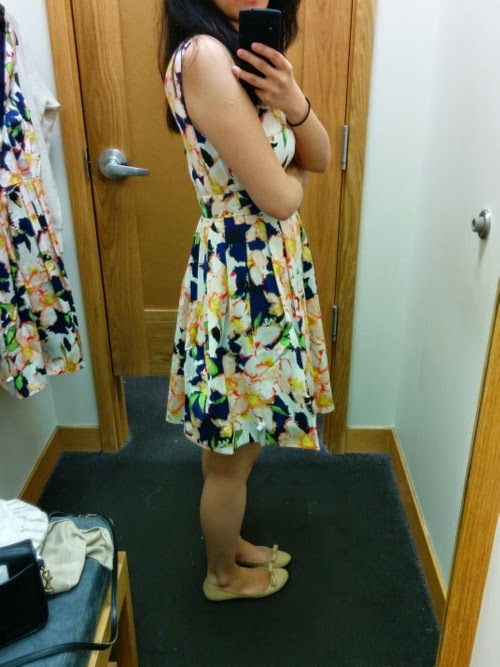 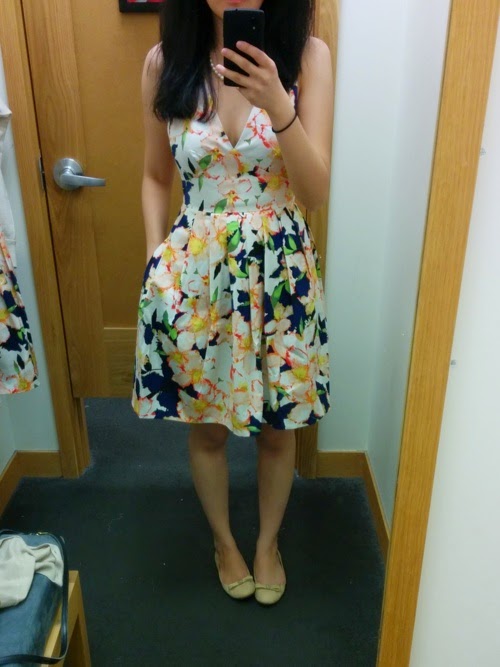 The moment I saw this dress in the new arrivals, I was interested in trying it out. I really like the cove floral print, and I love fit-and-flare dresses (I think the silhouette is flattering on almost everyone). I could see wearing this for a number of special occasions: weddings, dates, etc. It could even be dressed down for summer. In person, the print is just as vibrant as it appeared online. The material felt like a substantial cotton sateen (98% cotton and 2% elastane). Sadly the lining is 100% polyester, but it didn't seem too unbreathable. There's a back zip to help you get in and out of the dress easily. There are also pockets, which I always like to see in a dress. The skirt hit me just above the knee, which I don't mind, but I would have preferred at the knee. The one downside is that the v-neck in the front is very low. If I bend forward, you can see the front band of my bra. The v in the back isn't too troublesome. I tried on both my usual size 00 and one size up but found the waist/bust to be too tight in 00 so I think this dress runs small. The 0 was perfect. Overall, I really like the dress but would not recommend it for busty ladies.


Verdict: Like, but size up. Also the v-neck is quite low. 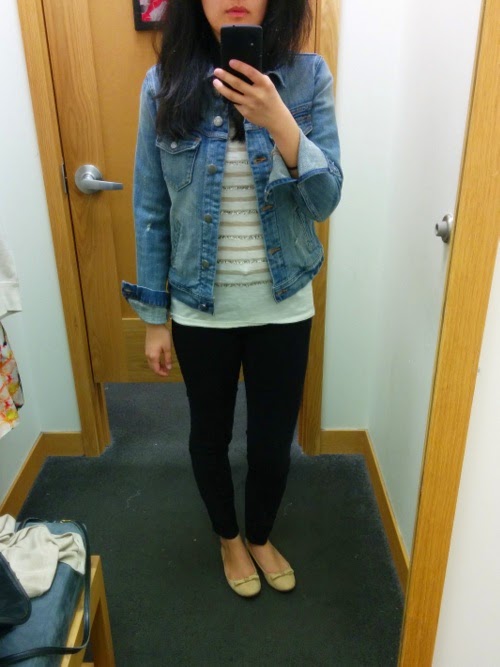 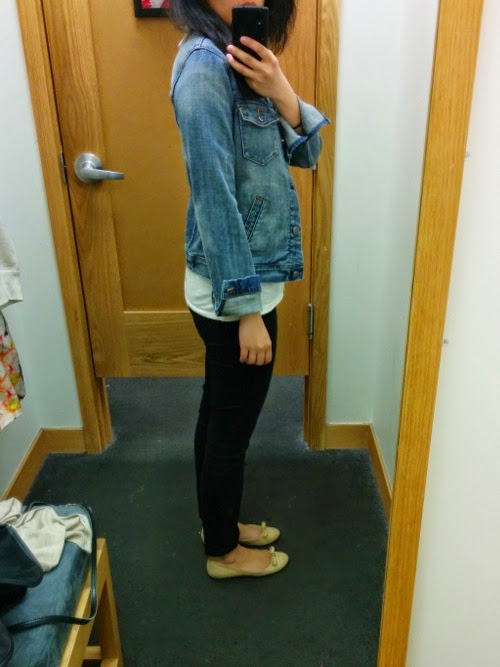 Recently I've been casually looking for a light blue denim jacket. I think it would be the perfect layering piece to wear over dresses during the summer when all of the buildings on campus are blasting their air conditioning. I had a very old Aeropostale one that I never ever wore, because the denim was extremely stiff. It was impossible for me to roll up my sleeves, and the fit wasn't quite right either - very boxy and short. I actually really like this rendition from J.Crew Factory. It has some small distressed details, but they don't bother me. The blue wash reads light blue with yellow undertones and would pair well with dark bottoms, which is what I mostly wear. The fit is true to size. I took my usual XXS, and it's fitted without being tight when buttoned. Unbuttoned it's slim without appearing boxy. The sleeves are a hair long, but I usually roll them up anyway. My favorite feature is that the denim is quite soft. The material is medium weight yet comfortable, instead of stiff like many other denim jackets I've tried. Anyway, this is definitely worth a look if you're in the market for a light blue denim jacket.


Verdict: Like, true to size. Note the distressed details.